Mini has revealed the first five-door version of its smallest hatchback model. Details and images here 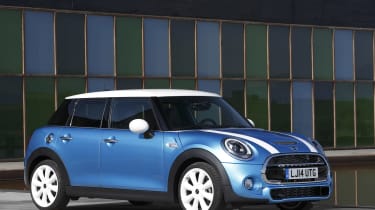 If you thought the latest three-door Mini was big, then take a look at its five-door variant. Because BMW has announced it will be selling a ‘more-door’ version of the standard Mini, enabling the not-so-little hatch to compete with the likes of Renault’s Clio and Volkswagen’s Golf – both of which are already available with five doors.

Essentially it looks like the existing three-door, but with an increased wheel base (some 72mm longer) and 3982mm length to cater for the extra two openings. The result sees the boot space increase by a third to 278-litres, with rear passengers enjoying an added 72mm of extra legroom. Rear headroom is also increased with the car sitting 11mm taller.

With BMW aiming to offer a Mini for quite literally everyone, we can also expect to see a faster JCW version of the five-door to offer even more thrills. This is likely to feature a more aggressively tuned version of the Cooper S’ 2-litre engine, bringing that car’s 6.8sec 0-60 dash down. With the Renaultsport Clio 200 Turbo and Volkswagen Golf GTI offering five doors with hot hatch performance, the five-door Mini will be entering an already fiercely competitive sector.

That’s not to say it won’t fare well however, because adding a couple of doors is unlikely to douse the exciting and playful chassis we discovered when testing the three-door Cooper S. The first Mini five-door will land in UK showrooms in autumn 2014, with prices starting at £15,900 (£600 more than the three-door). The most expensive five-door will be the Cooper SD at £20,050.