The most practical third-gen Mini yet, but rear styling splits opinion 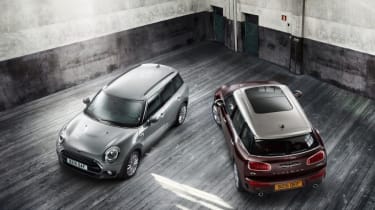 Mini has confirmed the most practical version of its third-gen platform, the Mini Clubman, is set to make its world debut at the Frankfurt motor show. The four-door estate features a split-door tailgate and comes available with a choice of three engines.

The first, Mini’s turbocharged three-cylinder 1.5-litre petrol unit, falls under the Cooper banner. It produces 134bhp and 162lb ft of torque and can manage a claimed 55.4mpg while emitting 118g/km of CO2. The second engine, Mini’s turbocharged four-cylinder 2-litre diesel, is labelled as the Cooper D, and outputs 148bhp and 243lb ft of torque while producing 109g/km of CO2 and a claimed 68.9mpg combined. 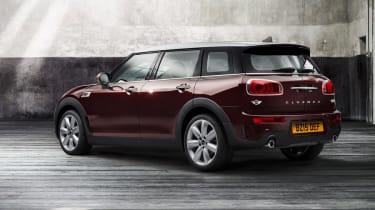 The most potent Clubman on offer is the Cooper S. Under its bonnet is Mini’s more powerful four-cylinder 2-litre petrol, which, like the Cooper S hatch, produces 189bhp at 5000rpm and 206lb ft of torque at 1250rpm. Performance for the heavier Clubman is unsurprisingly slower, taking 7.2sec (7.1 with an automatic gearbox) to accelerate from 0 to 62mph, four-tenths down on the hatch. It’s also 4mph off of the hatch’s 146mph top speed.

Ease off the throttle and Mini claims this engine can offer as much as 45.6mpg combined, while emitting 144g/km of CO2. If buyers ditch the car’s standard fit six-speed manual gearbox for an eight-speed automatic (the Cooper Clubman and Cooper D Clubman receive a six-speed auto), these numbers switch to 48.7 mpg and 134g. 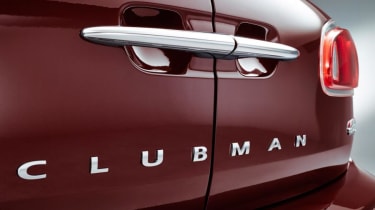 The inclusion of that eight-speed auto as an option is a first for Mini, with the auto hatch still using six gears. The addition of the extra two gears should provide a wider spread of ratios to maximise performance and economy, despite an increase in mass - the Clubman weighs 1300-1320kg (the auto is responsible for the heavier number), which compares to 1220kg for the five-door hatch. The new car is also larger in every dimension than the Mini five-door, at 4253mm in length - a significant 271mm longer.

The Clubman is 73mm wider, too, measuring 1800mm across, and it even sits 27mm taller at 1441mm. The upshot of these greater dimensions is increased practicality. The Clubman’s boot swallows 360 litres of luggage, growing to 1250 litres when the 60:40 rear-bench is folded down. Practicality is boosted further if an optional 20:40:20 bench is fitted.

Even with this added space, we suspect it'll be the car’s more eccentric looks that'll play the biggest part in attracting (or deterring) Clubman buyers. 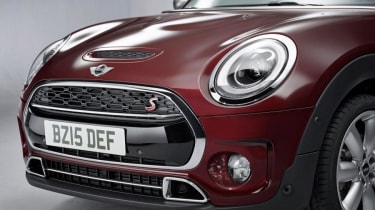 Though it loses the previous-gen’s asymmetrical five-door layout (which featured a single rear passenger door), the twin ‘barn-door’ tailgate and split rear-screen of the new car ensure the Clubman still exudes some of the classic Mini estate's design. The Clubman’s wider body also helps add balance to the latest Mini’s bulbous lines, with more than a hint of the striking Mini Superleggera concept. A quick straw-poll of the evo office suggests that not everyone is convinced by the new look, however.

Inside, the circular central instrument binnacle (with a 6.5-inch or 8.8-inch display), seats, steering wheel and trim are all familiar from the current-gen Mini hatch, though the Clubman does get its own take on the Mini dashboard with new aircon controls. 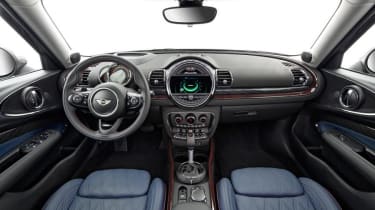 Mini predicts that half of the Clubman’s buyers will select the £2,875 Chili pack. This adds heated sports seats with cloth and leather upholstery, Comfort Access (a ‘swipe your foot under the boot and the rear doors open’ function), park distance control, automatic aircon and LED headlights and foglights.

The new Mini Clubman is on sale now, priced from £19,995 for the Cooper, £22,265 for the Cooper D and £22,755 for the Cooper S. Until the even larger Mini Countryman arrives in 2016, the Clubman is the most practical Mini on sale. The car looks set to make its debut at the Frankfurt motor show in September, with first drives shortly after.

Following its reveal at 2019's Frankfurt motor show, Alpina has unveiled pricing for its take on the BMW 340i Touring