Small SUV gets the hot-hatch’s power 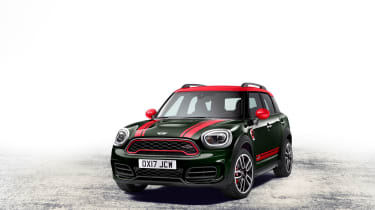 Mini has announced a John Cooper Works version of the new Countryman. The marque’s small SUV is the latest addition to the JCW line-up and powered by Mini’s most potent engine. It will be shown to the public in April this year at the Shanghai motor show.

The JCW Countryman is fitted with the same turbocharged 2-litre four-cylinder unit that goes into the rest of the JCW range, including the track-biased Challenge model. The engine produces 228bhp, as it does in every model. However, the Countryman develops 258lb ft of torque – 22lb ft more than the hatch and the same as the Clubman. This means the Countryman accelerates to 62mph in 6.5sec – 0.8sec faster than the Cooper S version. It will then go on to a top speed of 145mph.

The JCW Countryman has Mini’s All4 drivetrain. It’s an on-demand four-wheel-drive system and it means the Countryman is predominantly front-driven. However, when the car detects a lack of traction from the front wheels, a clutch pack engages the rear axle.

The JCW Countryman features a host of chassis changes to help it cope with the extra performance. The suspension has been retuned to feel sportier, while the switchable dampers can also be altered by  three driving modes (Sport, Mid and Green). It isn’t just the Countryman’s dampers that change in each mode, though – the steering, throttle, engine sound and, if fitted, the automatic gearbox all transform, too.

There’s a choice of two gearboxes – either a six-speed manual or Mini’s eight-speed Steptronic auto. The eight-speed option is a conventional automatic transmission and closely related to the gearbox that’s used across the BMW range. Although we are usually impressed with this gearbox’s behaviour, we didn’t think it suited the Mini Clubman JCW that we tried recently. Perhaps the transmission will suit the slightly bigger Countryman JCW.

For the exterior, the Countryman gets the full JCW treatment with a garish bodykit. Air inlets used to cool the engine and brakes have replaced the standard Countryman’s fog lights. A red highlight has been added to the outline of the front grille and there are JCW badges on both the front and back. The Countryman is also fitted with 18-inch five-spoke JCW alloys that cover a set of four-piston Brembo calipers. Inside it gets John Cooper Works sports seats and a sports steering wheel as well as an anthracite roof-liner.