The Clubman version of the Mini John Cooper Works: is it even madder? 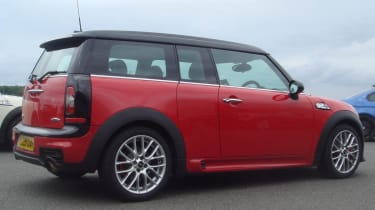 It’s been a little while in the making, but the John Cooper Works version of the Clubman is now here. It packs the same 208bhp punch as the hot hatch from its 1.6-litre turbo-charged engine and comes with a similar array of performance and styling additions, including an aero kit, 17-inch ‘Challenge’ wheels, 316mm Brembo brakes, a black grille and an Acantara steering wheel.

Whatever you might think of the styling, the Clubman does have the advantage of an 80mm longer wheelbase, and that’s a tangible benefit when putting so much power through the front axle.

This was only a brief introduction and we were limited to a few laps at Bedford, but it was immediately apparent that the Clubman felt less scrabbly out of tight turns than the hatchback and benefited from a little more poise through the quick stuff. The best way to attack the corners is to fling the car in on the brakes, so the rear helps with the steering, but it feels a little less frenetic. It’s still a hoot though. We look forward to a more detailed go in it in the near future.