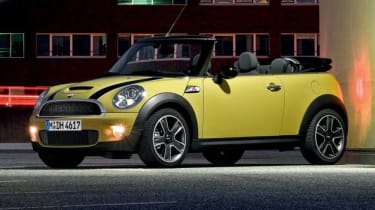 Mini has revealed its all-new soft-top, the second-gen Cabrio. It is essentially the current, two-year-old Mini with a canvas roof, replacing the first reborn Mini cab that went on sale in 2004.

Two models will be launched next March, the 118bhp Cooper and 172bhp Cooper S. Both use a 1.6-litre engine, with the S beng turbocharged (as opposed to the supercharged motor in the outgoing drop-top). Power is up but consumption and emissions down compared to the mk1, with some thanks going to BMW's efficient dynamics systems, including stop-start and brake energy regeneration technology.

Expect lower-powered models, including a diesel, to follow later in 2009.

Compared to the batchback Mini, the car has a raised shoulder line and increased strength and stiffness to the structure. Expect a nice boost in handling and minimal scuttle shake in comparison to the convertible Mini at the moment.

The roof remains largely the same, with an old-school pile of black canvas on the bootlid when it's fully folded down. The Mini seems to have the charm to get away with it, though, with the new Cabrio likely to command strong sales and perhaps a waiting list - a very rare thing for cars at the moment. The soft-top folds down in 15sec, and even comes with a fun 'openometer', telling you how many of your miles of driving have been sans roof.

It's the kind of trick that's kept Mini cool, while fellow retro re-borns like the VW Beetle have faded away and suffered a drop in image. If you want a Mini Cabrio, set aside £15,995 for a Cooper or £18,995 for a Cooper S - a £3k hike over a comparable hatchback. If you want a car that'll keep its value, though, look no further: the Mini diesel is the UK's least depreciation-prone car, keeping 63.2 per cent of its value after three years.