Drop-top image may not be to all tastes, but Mini's latest convertible is as good to drive as the hatch 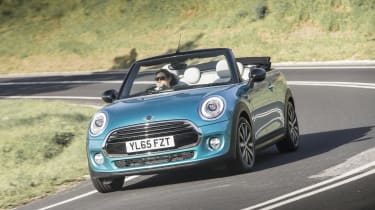 It took Rover 32 years to create a convertible from the original Mini, in 1991. BMW on the other hand wasted no time turning its first Mini hatchback into a drop-top, launching its first homage - complete with pram-style hood - in 2004. Now in its third generation, it’s been the UK’s biggest-selling convertible ever since.

Fastest, naturally, is the Cooper S, scrabbling to 62mph in 7.2sec, or 7.1sec if you opt for the six-speed automatic transmission. The Cooper passes the post next at 8.8sec (again, the auto is a tenth quicker), with both six-speed manual and automatic diesels scraping just under the 10-second barrier at 9.9sec. It’s slowest flat out too, at 121mph, with the Cooper and Cooper S managing a breezy 129mph and 143mph in manual form. A John Cooper Works model will follow. 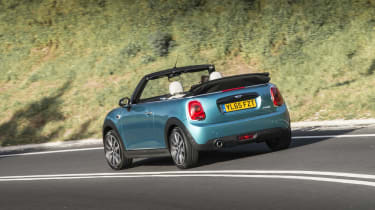 One can’t discuss a convertible without mention of how quickly you can expose your bonce to sunshine, or whip the roof up again should the British summer inevitably fail you. The answer here is 18 seconds to open or close, at up to 18mph.

The Mini Convertible’s wheelbase and track are both greater than their predecessor’s, while suspension settings have been revised to take account of the missing roof. Extra underbody struts at the front and rear help mitigate wobbles, as do stronger side sills and a stiffening plate under the engine. The changes add 105kg to the car.

We tried two models - the Cooper in petrol form, and the Cooper S. Where once a hatchback-based convertible was a recipe for floppy handling and scuttle shake over anything less than a glassy-smooth surface, Mini’s strengthening work seems to have paid off. Shuddering only occurred over the harshest of surfaces, and there was little evidence of body twist under higher cornering forces.

The extra weight does affect the cars, both models feeling a little breathless under hard acceleration and marginally less nimble than their closed-roof counterparts. Visibility is compromised too - with the roof down your view in the mirror is considerably reduced, while the enormous fabric C-pillar reduces over-the-shoulder views when the roof is up.

But the Cooper S’s biggest problem, on the optional 18-inch wheels, was one we’re already very familiar with. It’s the run-flat Pirelli P7 Cinturato tyres which, as we’ve found with the similarly-shod JCW, relinquish grip far too early and leave you with little confidence they’ll bite on turn-in. It’s frustrating, as the Cooper S’s chassis balance and darty steering are still present and correct - they’re just hard to enjoy on these tyres.

Conversely, the three-pot Cooper on 205/45 R17 Pirelli P Zero tyres was a joy. The steering is sweeter and grip levels are approached with more confidence and lost with greater progression. The balance feels more nose-led here and there’s not enough low-down torque to really fire out of tighter corners, but there’s a pleasing sense of grip and power being evenly matched. It rides better, too.

The three-cylinder engine is also a gem. The Cooper S’s four-pot feels stronger and parps and crackles amusingly in Sport mode, but it also loses interest towards the red line. In contrast the 1.5 is smooth, willing, and delivers consistent urge throughout the rev range. The manual gearbox is snappy too and the brakes are strong and progressive. 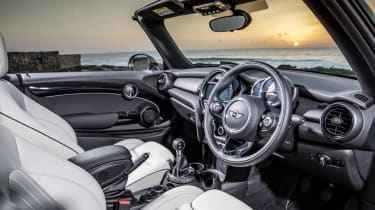 The Mini’s most obvious rivals are the Fiat 500C and Volkswagen Beetle Cabriolet. Each has similarly retro styling (and each is arguably more successful in conjuring the past than the slightly bloated Mini), but neither has the driving chops to take on a Mini over a twisty road. Better equipped for such a task is the DS 3 Convertible, newly-revised. It lets you drop the top for £16,295, though you’ll pay £18,695 for a model that gets within a whisker of Cooper performance. For £22,795 though, the dedicated Performance model offers more power than a Cooper S. 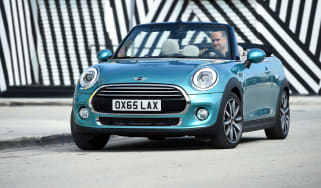 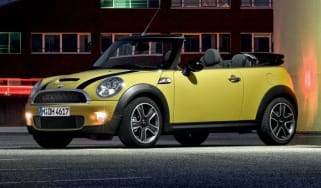 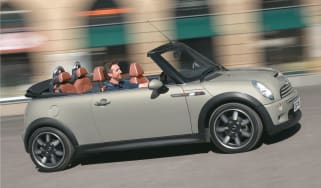