Latest convertible gets a fully-automatic roof, customisation options and a stiffened structure. Makes debut in Tokyo 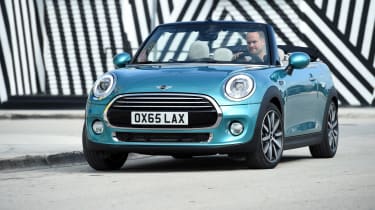 There are, and always have been, two sides to cars bearing the Mini name – whether those built under BMW or their Rover, British Leyland and BMC forebears.

On the one side, there’s the driving experience: nimble, grippy, precise. On the other, there’s the image: attention-grabbing, unthreatening, classless. The new Mini Convertible, it’s fairly safe to say, lands closer to the latter than it does the former.

Emphasis here is firmly on the Mini Convertible’s exterior and interior, since both will be in view in the best weather conditions. It features the characteristic open-topped Mini design cues, with a hood that folds onto the rear deck like a vintage pram, and multiple personalisation options to differentiate it from the herds of hatchbacks roaming the roads.

The soft top itself is fully automatic, retracting and closing in as little as 18 seconds up to 18.6mph, but also opens in stages to replicate a sunroof-style sensation for those inside. An Always Open Timer shames you into dropping the top as often as possible.

It’s also available as a ‘Mini Yours’ soft top, which features the near-obligatory Union Jack motif on its textile surface. A pair of rollover hoops spring to attention in 150 milliseconds should owners risk introducing their Union Jack canvas roof to unyielding asphalt. 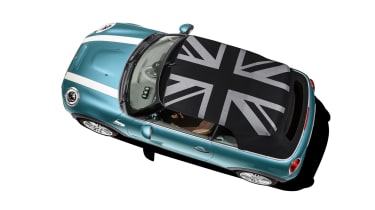 Other styling cues match those of the hatchback Minis, so there’s little here to convince those not completely sold on the latest Mini’s look. Apart from the new Caribbean Aqua metallic paintwork perhaps, but the LED-ringed headlights, traditional hexagonal radiator grille and stylised features still scream BMW-era Mini.

Sports suspension is optionally available while axle, spring and damper settings are slightly revised to account for the Convertible’s structural differences. This would be for naught were the car’s body not stiffened to take account of its missing roof, but a selection of struts under the body, stiffer side sills and an extra plate underneat the engine tie the wobbly metal together.

Engine choices at launch match those of the regular Mini range. At the top there’s a 2-litre, 141kW Mini Cooper S Convertible that sprints to 62mph in 7.2sec. Below this is the Cooper Convertible, with a 100kW 3-cylinder turbocharged petrol and 8.8sec 0-62mph dash, while a 1.5-litre, 3-cylinder Cooper D Convertible pairs an 85kW output with a sub-10 second 0-62mph sprint and 74.3mpg combined. A six-speed manual transmission is standard on all, with a 6-speed auto optional.

Pricing starts from £18,475 and the car goes on sale in March, just in time for the fairer-weather seaons next year. It made its world debut at the Tokyo motor show. You can read more from the Tokyo show on our hub page and find our key cars page here.