Convertible Mini finally brought in line with other Mk2 models 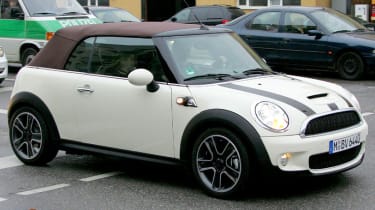 It's been two years since the second generation BMW Mini was launched, but the old-school Convertible has soldiered on alongside it. Until now - the drop-top is ready to be launched in updated form, as these barely disguised shots show.

The sportier wheels and kit on this one show it's the Cooper S, too - meaning it's the 172bhp, 192lb ft turbocharged Mini that, John Cooper Works aside, tops the range. And it's unlikely we'll be seeing a convertible version of that...

All the changes are along the lines of evolution rather than revolution. The interior and styling will be brought in-line with the minor revisions that bridged Minis part one and two, while the folding soft-top remains exactly that - no fancy folding metal - and it looks as though the peeled-back pram looks could remain. Only the Mini could get away with a clumsy roof sitting on the back of the hatch, although it could well be a little tidier at least for the second-gen cabrio.