2-litre four-cylinder engines are larger than the class norm, but deliver good power and torque through six-speed manual and seven-speed DCT gearboxes 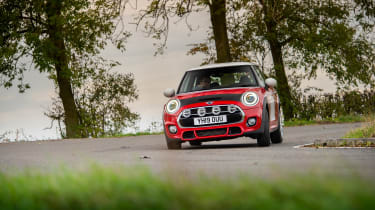 While 1.6-litre (and more recently 1.5-litre) engines have become the norm for hot hatch superminis, and indeed formed the basis of the last two generations of Cooper S, the current model instead uses a 2-litre unit.

Naturally, this is an economies of scale choice as much as it is to boost performance – the 2-litre, four-cylinder ‘B48’ power plant is used widely throughout the BMW empire in various states of tune, from this Mini through various 3-series and, amusingly, the four-cylinder variant of the Toyota Supra 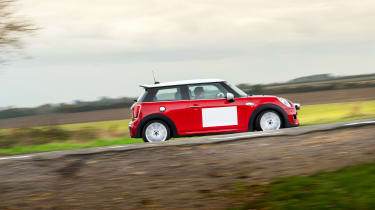 But it does mean extracting the S’s 189bhp output at 4700rpm is no great hardship when there are 302bhp variants floating around the group. Likewise, the larger unit is good for torque; 221lb ft of it, from a low 1250rpm, and while a 1205kg kerb weight is towards the upper end of this class, it’s not enough to hold the car back too badly.

Two transmissions are offered: a six-speed manual, and a seven-speed dual-clutch. Both drive the front wheels alone, and the latter naturally offers gearchange paddles behind the steering wheel. The behaviour of the engine, and in the auto’s case, the engine and transmission, is adjusted depending on the driving mode selected – the Cooper S has Green, Mid, and Sport options, with a corresponding change in throttle response and gearshift behaviour