Mini AC Schnitzer JCW review - do some German mods breathe some life into the JCW?

Schnitzer’s upgrades add some useful verve to the standard JCW, but doesn’t affect its overall character 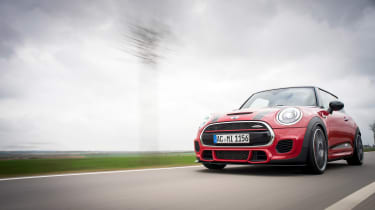 You can’t help but feel a little sorry for Mini’s engineers. With the first generation of the BMW Mini – a car that is now 18-years-old – they created a classic. British-built, encapsulating the style and classless appeal of the original but with a funky, retro-modern twist. Brilliant handling, class-leading dealer back-up, unimpeachable image. It won prizes and plaudits and sold by the bucketful.

Since then they’ve been asked to do it all again – twice. To reimagine the Mini, to retain that funky character and those best-in-class dynamics, but in bigger and bigger packages. There comes a tipping point where size and weight start to count against a car, and for those who place involvement above all else, we may have reached that point as far as Minis are concerned. With 228bhp the John Cooper Works should be a proper hot hatch, but it’s not as sharp as it could be. So, can the ministrations of the aftermarket tuners spice up the JCW?

> Click here for more on the incoming Mini JCW GP

AC Schnitzer has been fettling BMWs for over 30 years and making Minis go faster since BMW reintroduced the model. With success, too, having held lap records at both Hockenheim and the Sachsenring for road-legal Minis. The example we have here is based on the JCW, but Schnitzer also offers upgrades for the Cooper S that can bring it up to John Cooper Works power levels. 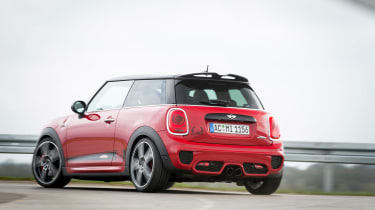 There’s more to this car than a performance upgrade, but the body has more or less been left alone, gaining just a simple front splitter (£400). However, the arch-filling 7.5 x 19-inch AC1 alloys (£2208) may let the cat out of the bag that this isn’t a standard Mini. The ride height is also lowered, by 20-25mm, thanks to a spring kit (£313), and aural stimulation is taken care of by stainless steel centre and rear exhaust sections (£1726). 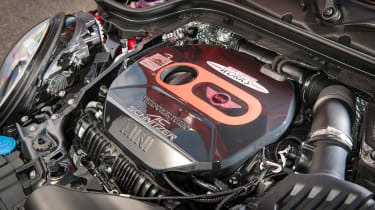 While we’d generally opt for the manual, the choice of the automatic transmission doesn’t hamper the performance. The car feels as quick as the figures suggest and on dry roads there’s little in the way of torque-steer. The exhaust features an active flap, and when closed at a cruise it’s subdued, but open it up and it delivers a surprisingly bassy and tuneful soundtrack, with plenty of crackles when you come off the throttle as the unburnt fuel explodes in the pipework, giving a rousing impersonation of distant small arms fire.

The progressive-rate springs give a surprisingly compliant ride, coping well with compressions and crests, and while the majority of the roads we come across are typically smooth German tarmac, it does cope well with less-than-perfect sections. The chassis tweaks have reduced body roll, and turn-in is impressive, with little in the way of understeer, which allows you to get on the throttle early and put the extra torque to good use. It feels more lithe and more on its toes than the standard car, perhaps not staggeringly so, but the bottom line is it’s very entertaining and a great companion for a back-road blast without compromising the normal car’s usability. 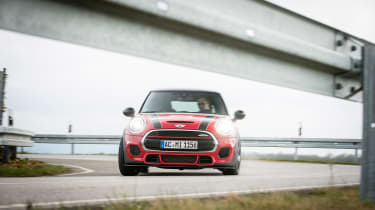 The thorny subject of cost is often where tuner cars can fall down, though, and for a complete conversion as here, AC Schnitzer UK will charge you over £8500. On a new JCW, that’s going to take the total price beyond £30k, which is a lot of money in anyone’s book. You don’t have to fit everything, though – you can cherry-pick the parts you want and we’d certainly be looking at the performance upgrade, springs and exhaust. And with F56 JCWs now available from around £16k second-hand, you can make a good case for carrying out the upgrades on a used example.

Ultimately, the AC Schnitzer JCW is a better proposition than the standard car – faster and with a little more verve. It’s not a night-and-day character change, but it is a worthwhile one, all the same.