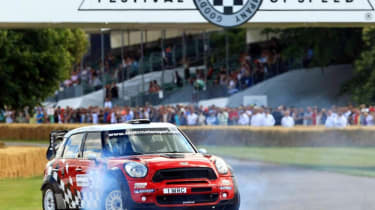 If you’re going to the 2012 Goodwood Festival of Speed this weekend then why not see what the drivers face as they go up the famous hillclimb or round the forest rally stage? Last year Henry Catchpole hitched a lift with Kris Meeke in Prodrive’s Mini Countryman WRC car.  You’re unlikely to see a more beautifully sideways run up the narrow strip of tarmac in front of Lord March’s house. Notice the speed he carries into the jink right-left round the intimidating flint wall and just how close he gets to the straw bales on the right-hand penultimate corner. Once at the top there are a few more donuts for the crowd… and Lewis Hamilton, who you can just see backing out of the way and covering his ears. The car was already wearing (in both senses of the word) gravel tyres, so then it was straight onto the forest rally stage. It’s a very tight and technical stage between the trees and if it’s wet then the chalky surface is like a skating rink. Meeke and the WRC car are obviously more than capable of tackling it but it’s a real battle in some of the older Group B cars. Various members of the evo team will be at Goodwood over the next few days, so if you see us around then say hello.