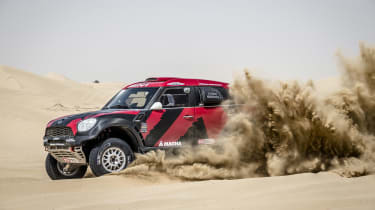 Drive is sent through an AP Racing sintered clutch and six-speed Sadev sequential gearbox to all four wheels. The figures imply impressive performance, but this too is limited. The reason is weight: At 1952.5kg at the kerb, the Mini weighs 80kg more than a BMW M5.

The engine is already running when I clamber through the roll cage and sink into the deep bucket seat. From the outside, the mechanical thrashing sounds like a cross between a diesel generator and, oddly, an idling Mezger flat-six. 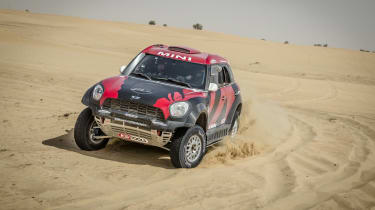 Stand near the side-exit exhaust, and the atmosphere in your immediate vicinity is another ten degrees hotter. Inside, the engine hums through the structure, though by the time I don my open-face helmet, it’s far from intrusive. This, like the air conditioning, is beneficial for the drivers – a relatively quiet car is less tiring to drive over thousands of kilometers.

It’s not a difficult vehicle to get moving, despite the racing clutch. If anything, it’s lighter than several road cars I’ve driven. The steering is light too, even though just a single turn of lock is available. And the throttle pedal is responsive – the travel is exceedingly short, but every millimeter elicits a response from the gravelly diesel. I begin to relax.

Flat out, the Mini is brisk but no more so than a modern hot hatchback. With outright speed removed from the equation, attention turns to conserving momentum. You can plough through soft sand with spinning wheels and flaring revs, and the car seems unfazed by the dunes and sandy ruts. Use all of the throttle’s travel – and ensure you’re in the correct gear, given the narrow power band and monumental turbo lag lurking just a few hundred revs below peak torque – you’ll continue forward unabated. Selecting a higher gear requires a hefty tug on the elbow-height lever between the seats. Lower, and you punch it forward. Changes are smoothest when the throttle is pinned against the stop.