See the new two-door Mini Coupe Cooper in action on video, plus a new picture gallery 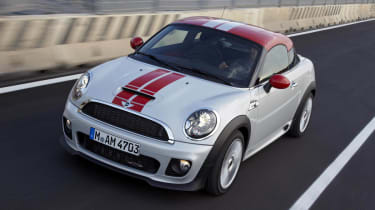 A video has been released of the new Mini Coupe, showing it in a variety of global locations such as Iceland, Rio de Janeiro and Hong Kong, with the aim of reinforcing the brand’s new campaign, ‘Another day. Another adventure’.  Aside from the marketing slogans, what it does do is allow the viewer to see the new coupe, and its controversial styling, in a variety of angles, lights and positions. Whatever your view on the ‘baseball cap’ roof, it certainly makes an impression, and points to the fact it may look better in metal than on screen.  The car in the film, the Cooper S, will cost £19,775 when launched, with its 181bhp 1.6-litre turbocharged petrol motor providing a 0-62mph time of 6.9sec, placing it in the middle of the range between the 208bhp John Cooper Works and the 120bhp entry-level Cooper. There’ll also be a 141bhp Cooper SD diesel version. This film previews a series of adverts that will coincide with the Mini Coupe’s launch in October 2011.

Details and pictures of the new Mini Coupe

Our first review of the new two-door Mini