Another radical departure for the brand - but can the two-seat Mini Coupe deliver substance as well as style? 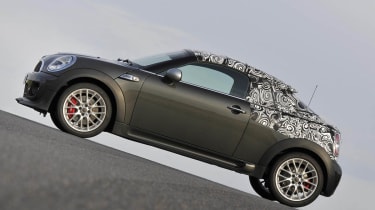 As a brand-stretching exercise the Countryman crossover seemed about as big a leap as the MINI franchise could make without actually falling over. By comparison, this latest new MINI iteration – driven as a pre-build prototype - seems eminently sensible.

Indeed, the Mini Coupe has given the brand a credible competitor to the likes of Audi's TT and Peugeot's RCZ. It's Mini’s way of saying, 'you want style? Well come and get it, then.'

The company describes the domed roof as ‘helmet style’ – bit risky that one – but I reckon it looks terrific. Another element that seems straight off an Audi TT (the two do share a very similar profile) is the boot-spoiler that raises automatically at speeds above 50mph. The Coupe also sits 29mm lower than the hatchback.

Inside, the dashboard is familiar MINI fare as it has been lifted straight from hatchback. But this cabin feels like no other MINI - the windscreen is raked 13 degrees more steeply than the hatchback's, and the tiny quarter lights and shallow rear window give the interior a close, snug, sporting feel. That's generally a good thing until you try to see what's behind you - without park distance control, you'd have no chance of judging where the end of the car is. Just as well that its standard fit, then.

Another surprise is the Coupe's relative practicality - the wide-opening lift-back reveals a boot some 120-litres more voluminous than the hatchback's (having no rear seats will do that for you).

The Coupe will go on sale with the familiar 141bhp turbo diesel, and the 1.6-litre petrol in three outputs starting at 121bhp, rising to 181 and topping out at 208bhp with the twin-turbo John Cooper Works (JCW). That's the one we've driven.

The Coupe is based on the cabriolet, and retains its chassis strengthening -that'll help expedite the build of the Roadster version next year. So the Coupe's torsional rigidity is increased compared to the hatchback JCW. Good news – what’s not so good is that it makes the Coupe 25kgs heavier than the hatch.

Visually, the JCW Coupe looks like it should be quicker than the lighter hatchback, and surprisingly, it is by a gnat's. That's because the weight distribution has been shifted forward, so there's more of it over the front wheels, which means off the line traction is better. Otherwise, the driving experience is all but indistinguishable from the JCW hatchback's. That means urgent, fizzing response in the lower gears - the six-speed manual is standard – as is a beagle-like eagerness to change direction.

Like the JCW hatchback, the Coupe is really good fun, especially when you switch off the DSC and let the car move around under you.

The Coupe is set to be priced hard against the Peugeot RCZ and the lower reaches of the Audi TT range. So we guess it all comes down to what you think a Mini is worth.

There’s likely to be a premium for the JCW Coupe experience, perhaps as much as £2000 over the hatch (prices have yet to be announced).

Which is just fine as long as you accept that you're paying for style and not a dynamic step change.