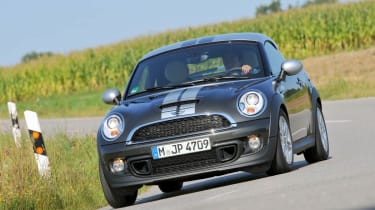 The engine is the 2-litre single-turbo unit shared with the BMW 118d, and it offers up 141bhp and 225lb ft. This is combined with CO2 emissions of 114g/km (£30 annual car tax, 13% BIK rate) and a claimed 65.7mpg, combined with a 7.9sec 0-62mph sprint and 134mph top speed.   Those frugal former figures are thanks in part to Minimalism, Mini’s version of BMW’s Efficient Dynamics, which stars a part-time alternator and automatic stop/start. The Coupe is substantially different to the three-door, using the same strengthened chassis as the Mini Convertible. While it adds a little weight (the Coupe is 25kg heavier than the hatch), the company’s engineers claim that this is at the lowest point of the car.

Our previous first drive in the Cooper SD hatchback was disappointing; its less than sparkling performance and slightly agricultural soundtrack jarred somewhat with the Cooper S badging. This Coupe version feels better. As well as the subtle chassis tweaks making it marginally sharper to drive than the already keen hatch, the SD engine is subjectively punchier here.

Perhaps the test cars had been more thoroughly run-in than those of our previous SD experience, but the headline 225lb ft torque figure feels more effective and the Cooper SD Coupe is usefully brisk, with enough overtaking punch in most gears. It still ought to have more power to properly live up to its Cooper S tag, though.

It’s a more comfortable car to drive quickly than the range-topping John Cooper Works Coupe, its more yielding suspension making it less crashy over imperfect surfaces and a smoother steer during fast cornering. It may lack the JCW’s ultimate excitement, but for those seeking the real-world benefits of a diesel Mini, it provides a satisfying real-world driving experience.

A Roadster version of the Coupe arrives in 2012. The Cooper SD will be the only diesel option available in either, the lesser 1.6 litre diesel used in the hatchback not being adjudged exciting enough for service in the two-seaters.