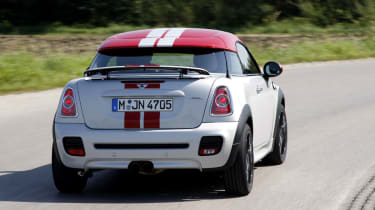 While it might look like a JCW hatchback with a roof chop, there are changes under the skin. The strengthened chassis from the Mini Convertible is used, and while it adds a little weight (the Coupe is 25kg heavier), the engineers are happy that it’s at the lowest point of the car. Springs and dampers are stiffer, too.

The rear spoiler deploys at around 55mph and detracts at 25mph, but when raised at high speed can provide up to 40kg of extra downforce. The windscreen is raked at a 13 per cent lower angle than on the hatchback, which not only boosts the interior and makes it feel more special than other Minis, but dramatically reduces wind noise – enough to require some extra sound deadening in the rear quarters to hide the roar of run-flat tyres.What’s it like to drive?

Like a better, slightly more exciting JCW hatch. The first thing you notice is a lack of torque steer; development feedback from the occasionally wayward three-door has seen this minimised, though the front wheels will still be troubled in the wet should you want to deploy all 208bhp.

The steering is cleaner and more direct (and it wasn’t bad before); only a big mid-corner bump will force you to adjust the amount of lock you’ve put on. There's virtually no body roll, though that sportier suspension might keep you busy on less cared for roads, as the ride can be far from relaxed, especially when you've got the Sport button pressed. Compared to the hatch, though, it flows a tad better and is easier to drive harder, working all four tyres and bringing the rear into play through bends.

The 1.6-litre turbo petrol engine is strong in all six gears, and it sounds good when you use all of its rev-range. Half a dozen laps of a quick test track showed the brakes to be strong and confidence inspiring during late, hard use. And on that smoother, more consistent surface, the JCW Coupe’s pace was very impressive.How does it compare?

An equivalent Audi TT or Peugeot RCZ will be more practical (bigger boot, two small rear seats) but more expensive, and for driving thrills a JCW Coupe has them both licked. Sales in the coupe class are often based on looks, though, and the Mini’s styling is likely to be quite love/hate.Anything else I need to know?

You can make the JCW stiffer still (and 10mm lower) with an optional suspension pack (around £1500), while you can forgo the stripes if you wish. A Roadster (the Coupe without its roof) joins the range in 2012. A Mini insider told evo that a more powerful Coupe to utilise the stiffer chassis is unlikely, though Mini’s 250bhp Nurburgring 24-hour racer proved a success…