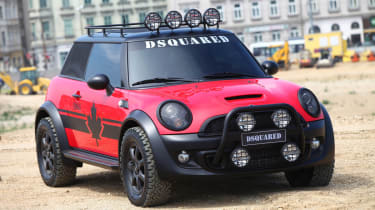 New Mini Cooper WRC world rally car not rugged enough for you? Canadians Dean and Dan Caten (known as DSQUARED²) have created the rugged one-off ‘Red Plugger’ as part of Mini’s ongoing efforts to raise cash for the annual Life Ball, Europe’s largest annual AIDs charity event, where it will be auctioned. Based on a Mini Cooper S, the Red Plugger looks suitably aggressive with its raised ride height, off-road knobblies, array of rally inspired lighting and a spare wheel strapped to its rump. But although it might look a match for the WRC car, the makeover does not extend to tweaking of the Mini Cooper S’s 181bhp turbocharged 1.6-litre engine, so performance is unlikely to trouble the Prodrive-fettled car destined to make Mini’s long-awaited return to rallying in Finland, nine weeks from now, at the hands of former IRC champ, Kris Meeke. News pics and video of the Mini WRC car Mini Cooper S versus Abarth 500 Esseesse