Mini has unveiled a new version of the Rocketman concept, to promote its involvement in the London 2012 Olympics. 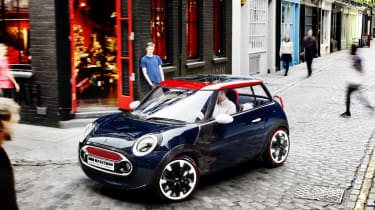 Mini has released some images of an updated Rocketman concept, released to celebrate the company’s involvement in the London 2012 Olympics. Changes include a new Union Flag-inspired paint job, and lots of bespoke details – including a glass roof, which illuminates using fibre-optics to re-create the iconic Union Flag roof.

First unveiled at the 2011 Geneva motor show, the Rocketman concept was intended to be a smaller, much more space-efficient 3+1 seat alternative to the full-sized Mini, featuring a clever carbon-fibre reinforced spaceframe chassis.

The concept will be displayed close to the Olympic Village in the BMW Group Pavillion – where as official sponsors of the 2012 Olympics, a display of BMW and mini products will be on show.