The Mini Paceman is a sportier, two-door Countryman. Is it good enough to warrant Mini's niche exploration? 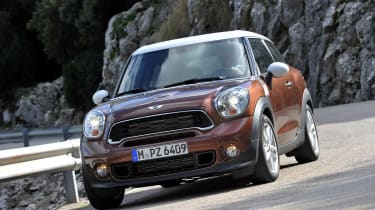 What is it? The Mini Paceman, the seventh model to join the range BMW began in 2001. Essentially a two-door version of the Countryman mini-SUV, it curiously costs nearly £1000 more, prices starting at £18,970. Technical highlights? The Paceman rides 10mm lower than the Countryman and gets marginally firmer Sports suspension, though this can be replaced with a standard setup as a no-cost option. You can pick between front- and all-wheel drive (dubbed ‘ALL4’), the latter effectively an electronic differential that sends 50 per cent of the engine’s power to the rear wheels in low grip situations, and up to 100 per cent should it sense ‘excessively sporty driving’. ALL4 versions command around £1200 more than front-drivers. What’s it like to drive? Like a slightly wieldier Countryman. Which is, on the most part, a compliment. It steers with the same keenness as a regular Mini and, in the Cooper S petrol version we tried, has the same turbocharged pace and willingness to rev. The downside, thanks to its more slab-sided SUV form, is the inevitably greater feeling of weight transfer when you up the ante. Cornering isn’t as natural as in a Mini hatchback or coupe, but it’s certainly one of the more agile small SUVs you can buy.  Our test car was front-driven, and didn’t corner quite as gamely as ALL4 Countrymans we’ve driven, where you can feel the rear wheels contributing during especially committed driving. The steering is still too lacking in feel, but prod the Sport button for a sharper throttle response and the wheel’s accompanying extra weight isn’t unwelcome like in other Minis; it firms up more naturally and the only downside of Sport mode is an artificial collection of pops and bangs not just when you back sharply off the throttle, but when you lightly lift when changing gear. Fun for five minutes, but the novelty wears off. The ride quality and body control feel better than in the Countryman, though there is still room for improvement. Our Mallorca test route was nowhere near as knobbly as most UK backroads, yet the Paceman could be unsettled over its less cared-for stretches. How does it compare? To what? The Paceman is a very hard car to find direct rivals for; closest in principle is a three-door Range Rover Evoque, which starts at £29,695 for a front-drive 148bhp diesel. The 141bhp Paceman Cooper SD kicks off at a much more attainable £23,070. Anything else I need to know? The range consists of Cooper and Cooper S petrols and Cooper D and Cooper SD diesels, power ranging from 110 to 181bhp, with manual and automatic transmission options. A John Cooper Works version is in development, and it will get the same 215bhp/all-wheel-drive setup as its Countryman cousin. Oh, and you can only have a pair of individual seats in the back – there’s no three-seat bench option.