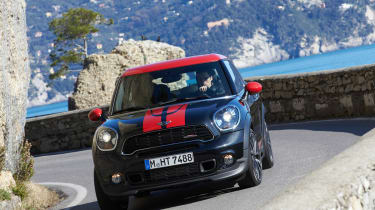 The Mini Paceman JCW, the high performance John Cooper Works version of the three-door Countryman SUV. With just about every niche box ticked, it should be the logical end-point of the current generation of the sprawling Mini clan. It’s also the most expensive model in the range as standard, costing even more than the limited edition John Cooper Works GP hatchback. The Paceman JCW is yours for £29,545 before options – or £940 more than its Countryman JCW equivalent.

Mechanically, the Paceman JCW is identical to the Countryman. That means a 215bhp version of the familiar 1.6-litre turbocharged transverse four-cylinder petrol engine (which equates to a few more quoted horsepower than other, 208bhp front-drive Mini JCWs), driving all four corners via standard ‘All4’ all-wheel drive. Mini claims a sub-7sec 0-60 time and a 140mph top speed.

Springs and dampers are firmer, and the JCW sits 10mm closer to the ground than the standard Paceman, which is itself 25mm lower than the Countryman. Anti-roll bars are thicker and larger 307mm diameter front brake discs are fitted as standard. As with all quicker Minis, a ‘Sport’ button can be used to sharpen throttle response and add some (pretty unnatural feeling) weight to the steering. The stability control system also includes an ‘electronic locking’ function to replicate (some of) the effect of a proper limited-slip differential, braking a spinning wheel to redistribute torque with DSC off.

Mini JCW’s are famed for – and, to some drivers, defined by – their bewildering urge under even half-throttle acceleration. The mixture of low-down punch and some unwieldy torque steer and wheelspin make them an uncouth but very exciting ways to travel, as does their love for a little lift-off oversteer if you’re so inclined.

Perhaps inevitably, the introduction of four-wheel drive stifles that excitement. Acceleration, even on sodden, rain-soaked British roads, is drama-free, each of the Paceman’s bhps and lb fts deployed with little fuss. The Paceman’s extra weight over a JCW hot hatch – at 1475kg, it’s a portly 240kg heavier – also blunts the acceleration and, in truth, the JCW feels barely quicker than the 181bhp Paceman Cooper S. The plus side is it sounds good when worked hard, rasping through a standard-fit sports exhaust and with a popping overrun in Sport mode.

The reworked springs and dampers are noticeably firmer than the standard Paceman, with sharper initial responses and more enthusiasm when asked to turn in. The ride is also very firm – borderline uncomfortable on particularly bumpy roads, though the 19in alloy wheels of our test car can no doubt shoulder some of the blame. Smaller 18in alloys are standard, while spec winter tyres and you’ll be driving on a set of 17s.

Pluses? Well it cruises well – flat, stable and quiet at an indicated 130mph when we tried one on derestricted motorway earlier in the year. And the four-wheel drive system copes well with low grip surfaces, juggling power between front and rear axles impressively quickly. Play with the throttle or attempt to throw a load of power at the rear wheels (All4 is an electronic differential, essentially, and sends 50 per cent of the engine’s power to the rear wheels in low grip situations, and up to 100 per cent should the diff sense ‘excessively sporty  driving’) and the Paceman tends to keep on gripping. It would take some aggressive provocation to buck this trend.

But really, the JCW’s biggest argument for its premium over the Cooper S – over £7000, in fact – is with its butcher looks and stance, rather than wildly different dynamics. It boasts good manners and plenty of grip, but there’s a shortage of the sort of dynamic fireworks that you could justifiably expect from a car wearing the John Cooper Works badge.

Poorly, certainly when it comes to money. Follow the logic of Mini’s incremental pricing and the JCW’s near-£30K pricing makes a degree of sense, to BMW’s accountants at least. The Paceman is more expensive than the Countryman, the JCW has to be pricier than the Cooper S.

The problem is that the über-Paceman ends up wearing a pricetag it struggles to justify considering rivals you can buy for similar money, including some from elsewhere in the BMW clan. The JCW looks a bit silly when compared directly to the 316bhp BMW M135i – which is just £1025 more expensive.

Still, Mini would counter that the Paceman JCW is still £12,000 cheaper than the equivalent Si4 Dynamic version of the Range Rover Evoque coupe.

As with other JCWs, you can now specify an automatic gearbox, and given the urban environment a lot of Pacemans (Pacemen?!) are likely to live in, it will probably be a reasonably popular option. It adds £1195 to the price.

The Paceman was the seventh Mini body style to launch out of the eight now available (the rest are the Hatchback, Coupe, Roadster, Convertible, Clubman, Clubvan and Countryman, if you’ve lost count) and with an all-new, third-generation Mini on its way, also one of the last in current mk2 guise, too. 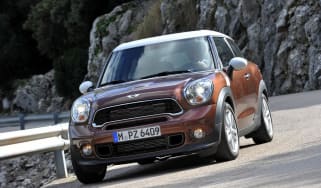 The Mini Paceman is a sportier, two-door Countryman. Is it good enough to warrant Mini's niche exploration?
Visit/mini/paceman/7172/2013-mini-paceman-cooper-s-review 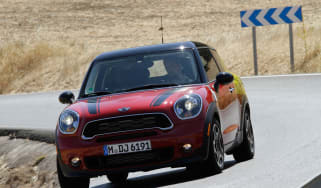 Mini has found another niche with the all-new Paceman, driven here in prototype form. Basically it's a coupe version of the Mini Countryman
Skip to HeaderSkip to Content