We try the new Mini Cooper SD range, a brisk BMW diesel engine used in every mini, from hatchback to coupe, roadster to Paceman 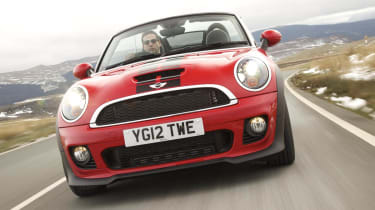 What is it? The Mini Cooper SD, the high performance diesel variant of the ever-popular small car. It’s not only the Mini’s most powerful diesel option yet, but the biggest engine in its 54-year history. Prices range from £18,870 for the hatchback to £24,290 for a four-wheel-drive Paceman ALL4.  Technical highlights? The engine is the 2-litre single-turbo unit shared with the BMW 118d, and it offers up 141bhp and 225lb ft. This is combined with CO2 emissions of 114g/km (£30 annual car tax, 13% BIK rate) and a claimed 65.7mpg in the hatchback, which completes 0-60 in eight seconds on its way to a 134mph top speed. Those frugal former figures are thanks in part to Minimalism, Mini’s version of BMW’s Efficient Dynamics, which stars brake energy generation, auto start/stop and ‘demand-based ancillaries’, such as the alternator.

A DAB digital radio is standard fit, while if you pick the optional satnav and the visual effects of the Mini’s infamously large, ‘dinner plate’ speedo are minimised. A close relation of BMW’s iDrive system, it’s a polished set up too.

As ever, the Mini is a nigh on infinitely customisable car, and the temptation to feverishly tick options boxes for different colours, alloy wheels, bonnet stripes, roof patterns and more (and that’s without speaking about the interior) proves too hard to resist for many buyers. The usual plethora of options (the average Mini customer’s spend is over £4000, apparently) will ensure few cars leave the forecourt at those list prices above. Our test Countryman topped £30K, for instance… What’s it like to drive? Thie Mini Cooper SD has an extra 26lb ft compared to the Cooper D, at an identical 1750rpm, while maximum torque stretches an extra 450rpm to 2700rpm. That results in a 0-62mph time that’s over half a second quicker, yet in truth the car doesn’t feel substantially brisker. Though our first impression of some box-fresh cars proved a little less thrilling than drives in some properly run in SDs – a few thousand miles in, this is a punchier, more exciting car, if still not quite enthralling enough to fully warrant that emotive Cooper S badging. A comparison of the range is interesting - the hatchback shows the biggest improvement in mid-range thump over a regular Cooper D, the Clubman feels the most resolved and balanced on rough and twisty roads, the Countryman feels least eager to swing through the SD’s powerband and also requires stirring of its gears through stunted motorway traffic.

Since 2011, Mini has also offered the Cooper SD treatment on its Coupe and Roadster models. The two-seat sports cars are largely identical to drive to their siblings but are designed to rival the likes of the Audi TT, Mazda MX-5 and Toyota GT86. With a diesel variant, they trump many of their rivals while combining a punchy driving experience with some real-world-friendly running costs. And if you don’t require rear seats, the Coupe’s cavernous boot probably makes it a more practical proposition than the hatchback. All cars boast the usual Mini plus points, though: tactile controls, a slick gearchange and electric power steering that while unnatural in its firmness when you press the infamous Sport button, is better weighted than most rivals.  How does it compare? Rivals for the hatchback include the 141bhp/236lb ft SEAT Ibiza FR TDI (£17,130) and 128bhp/221lb ft Vauxhall Corsa SRi CDTi (£17,390). Both handle well, have punchy powerplants and possess more practicality than the Mini. For many, though, their looks and image won’t be on par.

Such is the breadth of the Mini range nowadays, brisk diesel versions of the Audi A1, Citroen DS3, Range Rover Evoque, Peugeot RCZ, Audi TT (as both a coupe and Roadster) and BMW X1 are all viable rivals – among many others. The ever-expanding Mini portfolio may rub up traditionalists in the wrong way, but as a fun and characterful alternative to some established mainstream rivals, you can’t knock the bulk of the company’s range.

If you want reasonable economy but can’t bear the thought of filling up with diesel (and the still quite agricultural tones the SD emits at low speed) then the Ford Fiesta 1.0T Ecoboost is a fine choice. Its 123bhp 1-litre three-cylinder turbo engine boasts decent performance and an eagerness for a good thrashing, while the Fiesta stands beside the Mini when it comes to class-leading dynamics. Anything else I need to know? The Mini hatchback doesn’t have long for this world, the new mk3 Mini already teased in concept form with sales expected to start in early 2014. Then starts the long process of replacing those seven variants – no doubt with the possibility of that number rising further still. With its inherent appeal to company car users and those on a budget, expect the SD diesel to be a mainstay when this happens…