The Mini Roadster is yet another spin-off, sharing much of the Mini Coupe's styling with the Mini Cabriolet's collapsable roof. But can it deliver on substance as well as style? 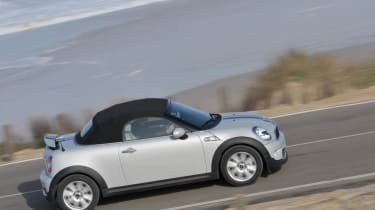 Yet another slightly different Mini variant – or, if you’re of a more cynical disposition, the bottom of a well-scraped barrel. The Mini Roadster is a soft-top version of the two-seat Coupe, sharing its sister’s lower windscreen line but with what we’re promised is a greater emphasis on driving dynamics than the existing, four-seat Mini Cabriolet.

The Roadster will be sold with the same selection of petrol and diesel engines as the Coupe. But, despite losing two seats and a fair percentage of its windscreen, the Roadster is £500 more expensive than the equivalent cabrio.

We’re struggling on this one. The Roadster gets a reworked version of the Cabriolet’s bodyshell, with reinforcement to compensate for the lost roof. Chassis settings are very close to those of the Coupe. The Cooper S that we drove is powered by a 181bhp 1.6-litre turbocharged engine, with drive supplied to the front wheels by a six-speed manual gearbox.

The folding roof mechanism is a basic system that reflects the Roadster’s pared-back ethos. Instead of the Cabriolet’s sliding and folding mechanism the Mini Roadster has a simple ‘throw back’ fabric roof that requires users to unlatch the roof and then physically heave it backwards (we’re told that power operation will be standard in the UK.)

A disappointment, if we’re honest. Dynamically the Roadster sticks closely to the established Mini script with keen reactions and plenty of entertainment to be had from ringing out the torquey turbocharged engine.

But, like the Cabriolet, it suffers from noticeable shuttle shake, which really takes the edge off the driving experience. On our Portuguese test route, and with a car wearing the ‘standard’ 16-inch alloys, it wasn’t too bad. But on Britain’s rougher roads and riding on the larger optional alloys that many buyers are likely to pick, we fear it’s going to become a big issue.

It’s hard not to conclude that form came before function in the Roadster. The roof does without a proper interior lining meaning that you have to look at its internal frame when it’s in place. And roof-up refinement is poor, with lots of wind and road noise getting into the cabin at everyday speeds.

Fashionistas will love the Roadster’s quirky speedster looks, but we’re struggling to see what it adds to what’s already offered by the cheaper and more refined Mini Cabriolet. And if you’re looking for a two seat Mini to actually drive, then the Coupe is definitely the better bet.

That depends on what you regard the Roadster as being a rival to. It will certainly win you more attention than something like an Audi TT Roadster, and at a substantial saving. But if you want to get some driving pleasure with your fresh air then the Mazda MX-5 is cheaper and far more dynamically accomplished.

This is almost the last iteration of the current generation ‘R56’ Mini – we’ll see the new, third-generation hatchback in 2013.