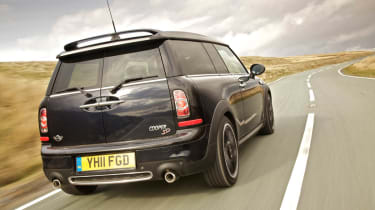 What is it? The Mini Hampton Clubman. It’s a special edition of the lesser-spotted Mini ‘estate’ that makes up just seven per cent of the company’s sales. It’s available as a petrol-powered 120bhp Cooper or 181bhp Cooper S, or as a diesel in 110bhp Cooper D or 141bhp Cooper SD forms. We’ve driven the range-topping SD, which costs £23,185, £3395 more than a regular Clubman Cooper SD. Technical highlights There’s no great technical innovation in the Hampton, just some cosmetic tweaks. They comprise Reef Blue metallic paint with a black roof, black leather seats, Damson Red bonnet stripes and interior detailing and Anthracite instruments borrowed from the Mini John Cooper Works. There’s a set of 17in twin-spoke alloys, too. The Chili pack is fitted as standard, with automatic climate control, Bluetooth, USB connectivity and bi-xenon headlights among the kit that’s included. What’s it like to drive? While all the usual fun of a Mini is present – weighty steering, a snappy six-speed manual gearbox and well-judged controls which inspire confidence – the Clubman has an extra trick up its sleeve. It has better ride comfort and body control than a comparable hatchback Mini, thanks to its 80mm longer wheelbase, which helps the car cope with bumpy roads (and hence reduce its occasional steering kickback on harsh surfaces) and corner more incisively. The differences are admittedly minor, but noticeable when a Clubman’s driven back-to-back with its conventional counterpart. The Cooper SD engine we’ve already rated. It’s torque-rich and punchy, but in a fairly narrow powerband, so while point-to-point pace is good, a petrol Cooper S provides a sportier experience and a less potent Cooper D serves up similar effervescence for £1500 less and with lower running costs. How does it compare? Chances are, if you want a Hampton you’ll order one. The special edition’s looks are unique and its high price places it out of objective comparison with rivals. Thinking of rivals is tricky, too. The Nissan Juke and Kia Soul are probably closest in concept. Both are cheaper and more practical, but will again likely trade on their styling. Anything else I need to know? Despite the minor dynamic improvements over a regular Mini, we aren’t inclined to help Clubman sales out. The hatchback is about as spacious and a good chunk cheaper, the Countryman costs a little extra but boasts much more usability. And four proper doors.