Mini has found another niche with the all-new Paceman, driven here in prototype form. Basically it's a coupe version of the Mini Countryman 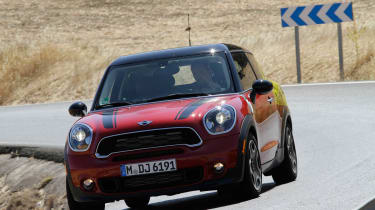 A prototype version of the forthcoming Mini Paceman, hence the silly disguise in the pictures, and sampled here in Cooper S ‘All 4’ form. It’s basically a coupe version of the existing Mini Countryman, with three doors and a lower roofline. Or, in other words, a niche within a niche. It will be going on sale in the UK next March, and although prices and final specs have yet to be confirmed, you can reckon on it costing around £1200 more than the equivalent Countryman, although possibly with a bit more standard spec.

From the front to the back of the B-pillar the Paceman is effectively identical to the Countryman. From there backwards the bodywork is all new, with a lower coupe-like roofline and a different back end (although you might have to squint through the prototype’s silly disguise to see it.)

Powertrains are carried over unchanged – the Paceman will be available with petrol and diesel engines in both Cooper and Cooper S states of tune, and with the option of front- or four-wheel drive. A John Cooper Works version will follow later.

Under its skin the Paceman has got firmed-up suspension and revised steering compared to the Countryman. It also sits 25mm closer to the ground than it’s bigger sister. It’s also (very) slightly lighter, being a reported 20kg leaner than the equivalent five-door.

You’re probably expecting to hear that the Paceman drives pretty much like the Countyman. But it doesn’t. The revised suspension settings have, on our first acquaintance, turned it into a considerably more dynamic machine, with less roll, more grip and a far less front-biased chassis balance, certainly on the dusty tarmac of our Spanish test route.

We drove the ‘All 4’ version which, like its Countryman sister, uses a part-time four-wheel drive system to redistribute torque to the rear axle when slip is detected at the front. On the Countryman you need to be pretty much driving on ice or mud to feel the benefit, but the Paceman proves far happier to play on slidey surfaces than its understeery sister. In that regard it feels like a bigger Mini hatchback.

The Paceman also seems to ride better than the Countryman, despite its firmer chassis settings, and with less vibration coming through the steering column over broken road surfaces.

Comments for the rest of the powertrain are as those for the Countryman – the higher-powered 1.6-litre petrol turbo engine doesn’t produce as much raw performance as you’d expect considering its 184bhp: blame the 1435kg kerbweight.

None of which answers the big question of ‘why?’ of course. The Paceman is still less agile than the Mini hatchback, and far less practical than the five-door Countryman. That said, despite the substantial price supplement likely to be asked for it, the Paceman will still look like a bargain when compared with a Range Rover Evoque three-door, and in the grand scheme of things it's no more irrational a choice.

The doors are vast and heavy – park on a lateral gradient and you have to heave your way out of the car. Space in the back is reasonable, but it feels far more claustrophobic back there than in the Countryman.

Mini has relocated the Paceman’s electric window switches from the centre console to the inside of the doors – a far more obvious place for your fingers to look for them. The rest of the switchgear is as chaotically distributed as before, though.