The Clubvan is a commercial version of the Clubman estate. Can its driving experience compensate for its relative lack of practicality? 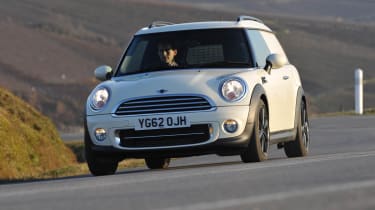 The clue is in the title – it’s a van version of the Mini Clubman. And while we don’t normally feature light commercial vehicles, it’s fair to say that the Mini’s transformation has been a mild one. Meaning that, apart from the lack of rear seats, it’s pretty much the same as its estate sister.

The conversion hasn’t been the most complicated task that BMW’s engineers have ever faced. The rear seats have gone and there’s a flat load area in their place. Between this and the front seats there’s an extra aluminium bulkhead plus a standard full-height mesh screen to keep the cargo out of the cabin. The rear windows have been covered in body colour panels and given a protective plastic shield inside. It keeps the same side-hinged doors as the Clubman – and also the silly extra ‘clubdoor’ on the driver’s side, although the mesh partition makes this mostly useless. Mini claims the van is just 15kg lighter, despite the loss of rear seats and trim. It can carry 500kg apparently – although you’d struggle to fit something that heavy into the dinky little loadspace.

Engine choices are all familiar – a 98bhp ‘One’, a 122bhp ‘Cooper’ and a 112bhp diesel-fuelled ‘Cooper D’. There are no plans for a more powerful Cooper S or John Cooper Works version.

It’s an amusing way to travel. The van combines the standard Mini’s well-balanced handling with the timeless thrill that comes from thrashing a light commercial vehicle along at unlikely speeds.

Most UK buyers will opt for the diesel engine that powered our test van. As always, it delivers reasonable performance (and mega economy) at the expense of a soundtrack that gets uncomfortably loud under hard use. And although it would be hard to argue against the oil-burner’s suitability for duty in a van, the sweet-spinning 1.6-litre petrol engine of the Cooper is certain to be a far sweeter companion.

The chassis is as good as always: the Clubvan pretty much exactly like its estate sister (unsurprisingly, as chassis settings are identical). There’s a good natural balance between grip levels front and rear, and the ability to adjust it in an instinctive fashion, plus decent steering feel, solid brakes and a nice, mechanical action to the gearshift. It’s noisier than the Clubman, thanks to the undeadened acoustic space in the back, and the lack of side glass means rear three-quarters visibility is poor. But we doubt you could have as much fun driving any other van.

It doesn’t. Factor money into the equation and you’re suddenly playing by the rules of premium hatchbacks rather than light commercials. The Clubvan Cooper D costs £17,055 – just £125 less than the Clubman Cooper D. But because it’s a van rather than a car, you’ll have to pay £215 a year in road tax (versus £20 for the Clubman Cooper D.) Another reason to consider the petrol.

On the plus side, VAT registered businesses can reclaim the tax, reducing the on-the-road cost to £14,257.

The Clubvan is the first BMW-produced commercial vehicle to be sold in the UK, although the company has made 'van' versions of other cars in markets with tax breaks for commericals.