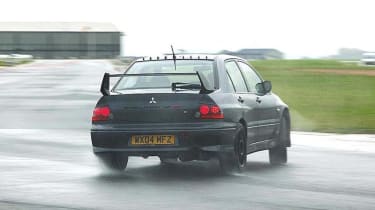 Be afraid, be very afraid. Here's an Evo with over 400bhp that's claimed to get from zero to 60mph in a mind-blowing 3.5sec and storm on to a top speed of over 175mph. However, what will really frighten you silly is an altogether hairier, scarier number - 47,000. Not scared? Put a pound sign in front of it. That's a whopping figure, so what do you get for your money? As far as the casual observer is concerned, an FQ-spec Evo MR that looks much like any other. What the Evo cognoscenti see is somewhat different, though. The pointy nose is given an altogether more dramatic profile thanks to the addition of a deep, sculpted carbonfibre splitter. The trailing edge of the roof also gets a swathe of carbon, puckered with 'vortex-inducing shark's tooth fins', and there are aerodynamic door mirrors, too. Subtle mods, but they ramp up the visual aggression. They don't account for a large chunk of the £17K premium over the Evo VIII MR FQ-320, on which this limited edition (just 100-off) model is based. The bulk of that investment finds its way under the bonnet, because extracting over 400bhp - 405bhp, to be precise - from the 2-litre turbo engine is no cheap exercise when it's done with this level of integrity. You can find tuners offering this output or more for considerably less but this isn't a chip-it-and-hope-it-hangs-together upgrade. Indeed, despite its 200bhp-per-litre output, you can reckon that this engine is virtually bullet-proof because Mitsubishi UK is selling the FQ-400 with the same three-year, 36,000-mile warranty as other Evos. The work is extensive and involves the expertise of Ralliart UK, Rampage Performance Motorparts, who source the engine components and put the FQ-400s together, Flow Race Engines, who build the engines, and Owen Developments, the tuner behind the other FQ upgrades, who specified the new turbo and designed a cast stainless steel exhaust manifold. Little of the FQ-320's engine remains; the cylinder block is a high-strength HKS design, as are the big- end bolts and forged con rods, which are topped by Omega forged pistons. Then there's the bespoke Garrett turbo and exhaust manifold, and a Janspeed sports catalyst. Fuel and ignition are controlled by a precision Motec management system that also has a data-logging facility, and there are HKS iridium spark plugs and a high-pressure fuel pump. There's a much tougher clutch, too. The headline 405bhp at 6400rpm is backed up by peak torque of 355lb ft at 5500rpm. Another vital FQ-400 ingredient is Alcon six-pot monobloc front callipers and 343mm diameter discs, which work with the standard MR's sports anti-lock system. Also included in the price is a driver training course. Fire it up and this potent engine sounds like that of our long-term FQ-340 only with a bit more bass, but from the outside the burble from the fat tailpipe is almost seismic. Set off and the beefier clutch makes itself known, with a snatchier, trickier bite, but the engine feels only a fraction less smoothly fuelled and tractable than the FQ-340's, while off-boost urge builds with a similar slow but worthwhile progression. Yet while the 340 is on boost and hauling hard before 3000rpm, the 400 doesn't really get going for another 1500rpm. Boost doesn't arrive aggressively. You can picture the torque curve as a steadily rising line that takes a smooth upward radius at 4500rpm and then, once you're pressed into the Recaro, at about 5000 it goes near-vertical. The 400 pushes way harder that the 340, way beyond what's comfortable and launches you clean into Loopyland. Full boost in a straight line on a dry road gives the four-wheel drive plenty to think about - you can sense clever diffs and electronic strategies struggling to cope. But cope they do, and it's a measure of the competence and flair of the MR's unmodified chassis that it's up to the task. You wouldn't try to get a 340 power-sliding on the road - it's just not necessary - and the same goes for the 400, so in the wet you have to be wary of the engine's late, massive power delivery. I was glad to get a feel for what happens on a wet test track, and I have to say the controversial Yokohama A046s (currently not available other than as original equipment) were wonderfuly progressive and, in combo with the sophisticated chassis, allowed the Evo to be over-driven with ease. And those Alcon brakes are hugely effective and fade resistant. We couldn't match the claimed performance but the 400 leapt off the line, all four tyres smoking, to record zero to 60mph in 3.99sec and 0-100 in 9.94, which isn't too shabby... On the road, though, an FQ-340, probably even a 320, would be a much more effective point-to-point machine thanks to its much broader, more accessible spread of power. The FQ-400 provides the wildest Evo ride, though, and comes with the reassurance of a full warranty. So if you don't mind paying, you can scare yourself stupid every time the rev counter needle hits 5000rpm, guaranteed.