Mitsubishi leaves the competition it has set records at 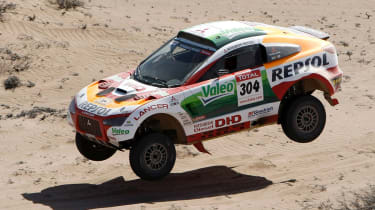 Mitsubishi has shocked motorsport fans by announcing its withdrawal from all cross-country rallies including the Dakar Series and Dakar Rally, events that it has previously dominated.

Amid talk of recession and financial meltdown the news comes off the back of reports that Mitsubishi’s sales have declined by 15 per cent year on year and the company has indicated that it is the knock on effect of this that has resulted in its departure.

The Dakar Rally has been an integral part of Mitsubishi’s motorsport heritage and a staple of its rally line up.  The first Dakar Rally win came in 1985 and it found success in 12 of 26 starts with different variations of the Pajero taking all 12 victories. Success culminated most recently with seven consecutive wins between 2001 and 2007. Dominance of WRC with Tommi Makinen in the late 90s firmly established Mitsubishi as serious title contenders across different disciplines but its grip on the titles slipped and on-off appearances in the championship dented its credibility before eventually withdrawing.

There is currently no news on what will happen to the racing Lancer currently in service and if it will continue to compete in private hands. A question mark has also been raised as to how Mitsubishi’s road cars will be affected with technologies derived from the racing versions directly translating to road going versions.

Strong competition from Volkswagen’s Touareg and faltering reliability has meant that Mitsubishi has struggled to challenge recently. It seems that the lack of recent form has made the decision to pull out easier. On the face of it a tenth place finish in the most recent Buenos Aries event has signalled the end for the team whilst hopes of a return to WRC have also died.

With the industry in crisis other Japanese manufacturers have also been reacting to the news with Subaru and Suzuki pulling out of World Rallying, Honda departing from F1 and most recently Kawasaki withdrawing from Moto GP.

In better news, Mitsubishi is planning a trio of new performance cars in the shape of a tweaked Colt Ralliart and two hot Lancers offering up to 400bhp.