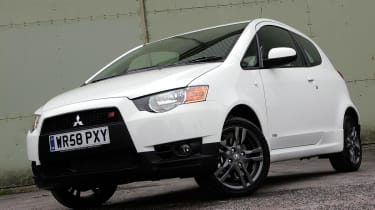 Mitsubishi is fighting back after it was revealed it’s pulling out of off-road motorsport. Its riposte is a trio of performance cars, starting with a fettled Colt Ralliart.

The recently-launched Ralliart replaced the warm but slightly undercooked CZT, and a new TWR Walkinshaw version looks set to turn things up closer to 11. While the 1.5-litre engine – and its 147bhp power output – will remain untouched, there’ll be a host of tweaks underneath with sharper suspension and a lower ride likely changes. There’ll be a beefier bodykit to mark out the TWR, with roughly a £2K price premium over the stock £12,049 Colt Ralliart. You can buy one from around April.

Also getting the Ralliart treatment is the new Lancer Sportback. It gets 237bhp and, perhaps the best news, Mitsubishi Evo IX running gear. That means it should be a rawer and less confused piece of kit than the Evo X. It does come with the company’s SST dual-clutch gearbox, but it has been remapped to answer some of the criticism levelled at the new transmission.

The tenth version of Mitsubishi’s rally replica isn’t left alone either. The 400bhp FQ400 is on the way, and it should be closer to the hardcore Evo we’ve been craving. It’s expected to cost close to £50K, mind, but it should have some genuine supercar-scaring pace. Like the Colt, the two new Lancers should be on sale from April.