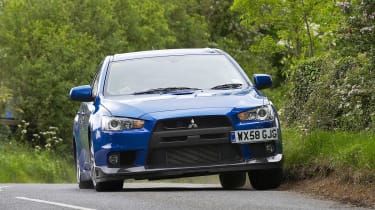 Like a WWF re-homing programme, the poor Evo X has been released from the driving captivity of London (where Richard Porter had been caging it for the last few months) back into the relative wilds of the Shires. It seems to be loving its new freedom too – the engine has loosened-up like a secretary at a good office party and the warning light that Porter mentioned last month hasn’t been in evidence since the car has started being driven quickly again. Without trying (i.e. no short shifting or coasting downhill) I even managed 32.2mpg on an 80-mile schlep from Surrey to Buckinghamshire!

I posted some of these thoughts on Twitter (yes, me too) and almost instantly got 140 characters of guffawing from Richard in response. I know Harry doesn’t like the Evo either, yet Ollie, Ev and Stephen do, so it seems that battle lines are being drawn. We’ll lay down both sides of the argument next month but for the time being I’ll leave you with this opening salvo: I really like the music server option on the stereo which records all the CDs you put in and saves them to a hard drive. In fact, if you picked up a used Evo X you could probably tell quite a lot about the previous owner by the music collection left in the car’s internal library. Our Evo X arrived back from London with Celine Dion on it…