Want to buy a decent Evo IX? Here's what to look out for 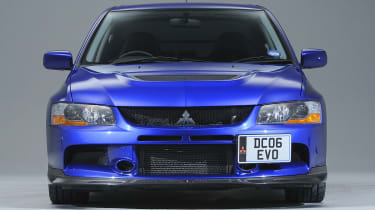 Despite being highly stressed, the Evo engine has proved durable. One possible problem is noisy hydraulic tappets which can take a while to quieten down if the engine hasn’t been run for a few days. Lack of frequent oil changes is the usual reason, causing blockages in the oilways and air to stay trapped in the tappets. New oil and regular use usually fixes the problem, but replacing the tappets is quite easy.

Engines tuned with remaps and higher boost pressures are more likely to blow a head gasket or damage pistons, so check for untoward blue smoke or, when fully warmed up, steam. Blue smoke can also result from failed turbo seals or, worse, bearings. Black smoke on hard acceleration is normal; Evos tend to run very rich under load.

If the car has been ‘launched’ regularly the clutch could be very badly worn, and it will probably judder even if it hasn’t started to slip. If it has been changed, the flywheel should have been changed at the same time because the whole lot comes as a balanced assembly. Changing the clutch takes over six hours, costs around £900 and involves moving both the gearbox and the transfer box containing the centre diff.

The Active Yaw Control warning light must illuminate when the ignition is turned on and go out after a few seconds. If it doesn’t, it might have been disconnected to hide a problem. Groans when turning tightly left or right point to trouble in the rear differential and its AYC. A new diff is hugely expensive, but if the warning light comes on and the diff appears to be functioning properly, a new AYC pressure switch could well fix it. 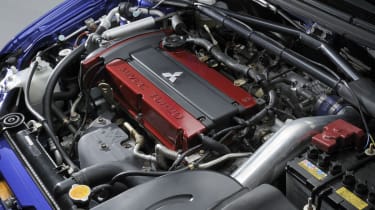 The suspension is robust, as you would expect in a rally-bred car, but check for leaking struts and dampers and listen out for clonks and groans. The front brake discs can warp if used very hard, but disc and pad upgrades abound. Make sure the tyres are a proper quality brand and haven’t worn unevenly; if they have, find out why.

Evos tend to be driven fast so don’t discount the possibility of accident damage. Check all the panel gaps for consistency and the inner wings and boot floor for ripples. If you’re considering a grey import, check underneath for signs of rust.