We show you how to buy one of the most extreme models carrying the Lancer Evolution name, the Evo IX 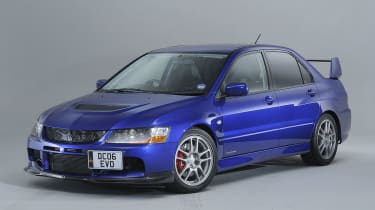 Evo IX? One day, the number nine will be a sacred one for those of the Evo faith – the Mitsubishi Lancer, that is, not this magazine. For the IX was the last ‘proper’ Evo in the eyes of the purist, the last of the line that spawned multiple rally championship winners and an entire cult.

Those alien to the faith might wonder what the fuss is about, given the prosaic four-door shape that cowers behind the wings, the vents, the giant exhaust pipe and the world’s most visible intercooler. The interior does no more to convince the unconverted, with a background of hard, cheap surfaces once past the onslaught of racy seats and the switch for the Active Yaw Control. But what the eye doesn’t immediately see are the lightweight aluminium panels, the sophisticated springs and dampers, the big Brembo brakes and the four-wheel-drive hardware. The cost is in the technology, the genes are in the rally stages.

Most Evo IXs here in the UK are official imports, sold via Ralliart, which took its name from the factory competition department and was set up here as a Colt Car Company (i.e. Mitsubishi UK) subsidiary. Ralliart took the high-spec Evo IX GSR as the starting point and applied various modifications to create the UK-specific FQ cars; what the initials signify is best left to your scatological imagination. 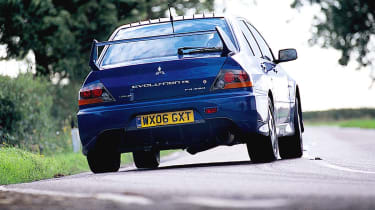 At the 2005 launch, the FQs came in 300, 320 and 340 flavours, each with approximately corresponding (actually slightly higher) bhp figures. As if these outputs were insufficient for a car with a 2-litre engine, later editions sported FQ-360 and even FQ-400 designations and power to match. Just 100 of the latter were made, costing a heady £46,999 new and promising 405bhp, although all the uprated parts – including the turbo, exhaust manifold, pistons, connecting rods, clutch and brakes – are available to uprate the lowliest Evo to a similar spec.

It’s vital, then, to know what the Evo you’re looking at purports to be, and what it actually is. For example, if it’s an RS (which has no AYC) or a GT, it’s a lower-spec grey import, which is fine in itself but will lack factory underbody seal and will inevitably have had some mods to make it UK-legal. Common to all, though, is huge, smoothly delivered power from a 2-litre turbo engine with exotic internals blended with a highly interactive, intriguingly adjustable four-wheel-drive system, a combination able to annihilate ribbons of flailing tarmacadam like almost nothing else. 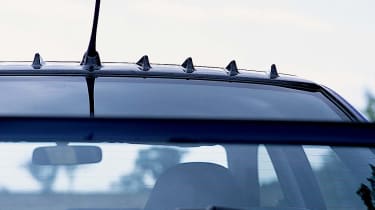 ‘I’d built myself a Dax Rush with a Hayabusa engine but I felt a bit vulnerable in it. So I thought I’d get something more practical, but as quick or even quicker. Then one day I popped into my local Mitsubishi dealer and there it sat on the forecourt, an FQ‑340. It was a year old and had done just 1500 miles as a pre-registered demo car. So I bought it!

‘That was in April 2007 and I’ve done 17,000 miles in it since. I went to Sweden in it last year and it did 25mpg if I drove steadily, but normally I just fill it up as needed. The biggest cost is the petrol. Car tax is cheaper than you’d expect – there’s no official CO2 figure so it’s classed as a PLG at £190 a year – but insurance is group 20.

‘I’ve upgraded the brake pads to Carbotech XP8s and replaced the clear rear lights with the red ones from an Evo VII. It has a de-cat pipe and a panel air filter, too, which have taken it to 370bhp on the rollers. ‘The Evo is just so good at what it does. It can be a bit tricky in full-on rain on the standard Yokohamas, but on trackdays it’s fantastic.’ Dave Cherry