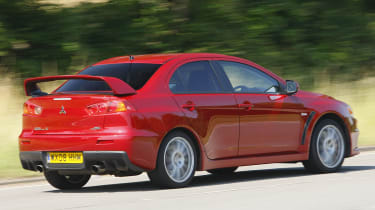 I drove a Mitsubishi Evo VII automatic once, called a GT-A. This was a deeply schizophrenic car. It still had much of a regular VII’s looks, toned down a little, but inside it had flatter, higher, leather-clad chairs and was missing that important left-foot pedal. Its gearbox was a five-speed, torque-converter auto with a Tiptronic-type manual override and shift buttons on the steering wheel. The suspension was more supple than normal, too.

What was the point? To make the Evo into some sort of executive express. Yet with the connection between driver and the mechanics of driving severed, the Evo’s point as a pleasure machine was lost. Instead, you passed your time gazing at the naffness of the cabin plastics.

Our long-term Evo X with its twin-clutch SST triggers similar thoughts, although it retains the proper seats and the visual toughness. Yes, it has real paddle-shifters and its gearshifts are usually more definite than that old auto’s, but sensation is deemed less important than potential shift speed and that, for a road-car pleasure machine, is wrong. It shouldn’t be about saving fractions of a second on a trackday lap time, because we’re not in a race. It should be about driver involvement, the subconscious, split-second timing that gives you total control, the need to see and feel the gearshift process through and not just activate it. So I seldom bother now with the paddle-shifting, not least because the Evo needs so many shifts with its ultra-short intermediates. It just isn’t satisfying.

Some new cars with DSG-type gearboxes score lower CO2 figures than their manual counterparts, causing DSGs to be hailed as the all-purpose planet-saver. Not so. In the artificial environment of official test-drive cycles a DSG might do better, sometimes simply because they have more gears and a longer-legged top: how else does a new 911 PDK get down to 225g/km?

In the real world it’s different, and the SST/DSG seems to be no economy help whatsoever in the Evo X. You’d think a 12-gallon tank would be big enough, but at a typical 20mpg I seem to be forever filling it up even if I drive gently. Where does all the fuel go? Can the engine really be that inefficient?

I’m not using the Evo as much as I should be. That’s because I resent the savage fuel cost incurred in not enjoying it much. Sometimes, on a really good, twisty road, it becomes a marvel. Other times I can’t quite see the point. Just like that old Evo VII GT-A.