Jethro Bovingdon is at Blyton Park to see which is faster over a flying lap, the Morgan Plus 8 Speedster or BMW R Nine T. Video here 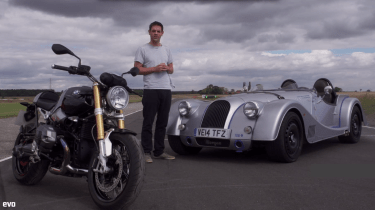 We return with our next instalment of car v bike with a slightly more retro twist. Representing the two-wheeled foray is the BMW R Nine T, a classic styled 1170cc bike producing around 110bhp and flaunting flared exhausts. It goes up against the Morgan Plus 8 Speedster, an equally old-school looking machine with a BMW sourced 4.8 V8 producing 376bhp. Both would look great parked outside a vintage Shoreditch coffee shop, but burbling away on Blyton Park’s startline, they couldn’t look further from home.

After practice runs, evo’s Jethro Bovingdon admits the tail-happy Morgan is surprisingly nimble, no doubt aided by its skinny 1100kg kerbweight. Strong brakes mean the hard stop at the end of the back straight should be an effective area to drag back lost straight-line speed, because with a punchy boxer engine, the bike looks set to stretch out an advantage anytime its front forks are angled upright.

Rider Bruce Dunn is in high spirits before his timed run, having been impressed by the BMW’s balance and sweet engine. He does concede that ground clearance is an issue, with him having to open up his turn angle anytime the footpegs scrape along the track surface. But with Jethro getting his racing driver excuses of low grip and a clumsy six-speed auto ‘box in early, before the stopwatch comes out, nobody knows who’ll win.

Both the bike and car are flung, thrown and hustled around the curves and straights of Blyton as if their lives depended on it, setting impressive times given that neither is designed for the track. But which is faster? Watch the video above to find out. Just like our first Jaguar F-Type V6 S v Triumph Street Triple R battle, it certainly isn’t an easy one to predict…