Production of the current Morgan 3 Wheeler is drawing to a close, with the limited-run P101 marking the occasion 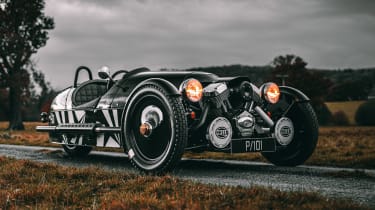 Morgan has revealed the limited-run 3 Wheeler P101, a take on the three-wheeled sports car celebrating its near-decade long production run. Featuring a handful of unique design tweaks to set it apart from the standard model, just 33 examples will be produced with prices starting at £45,000.

Named after the internal model code for the 3 Wheeler programme during development, production is scheduled to come to an end in 2021 when type approval for its S&S engine expires. Morgan has announced that it will make a return, but no details on the successor have been disclosed as of yet.

> Morgan Plus Six review – the British brute with BMW power

Unlike a standard 3 Wheeler, the P101 is intended for a single occupant only, with a composite resin tonneau covering the passenger side of the cockpit. This is finished in a natural translucent golden colour referencing materials found on engine shrouds of 1970s racers.

Another new addition is the new low-drag aero-disc wheel, painted in the standard body colour with Brass wheel hub knock-ons. A pair of nine-inch Hella spot lamps are also new to the P101, mounted low to reduce turbulence around the suspension whilst providing a more purposeful look. 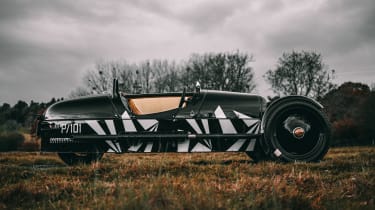 Other bespoke details can also be found throughout, with the straight-cut exhausts now ceramic coated in alternating colours; white on the left, black on the right. A small fly screen is also fitted, as are new louvres, exposed rivets and decals unique to the limited model. 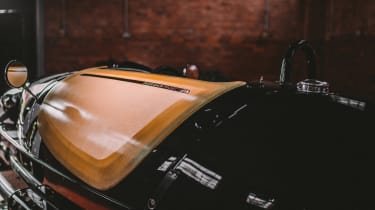 Performance hasn’t seen any change, with the 2-litre S&S V-Twin motorcycle engine sending 68bhp and 95lb ft of torque to the rear wheel through a five-speed transmission. Despite its conservative engine specs, it’ll still reach 62mph in 7sec with top speed at 115mph, thanks in large part to its 585kg kerb weight.

Production of the Morgan 3 Wheeler P101 is already underway, with prices starting at £45,000, a premium of around £5000 over the ordinary car.