Morgan Plus Six review – the British brute with BMW power 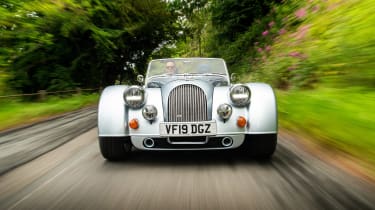 Morgan is enjoying a purple patch, from the sales success and critical acclaim of its 3-Wheeler (launched eight years ago now, remarkably) through more recent investment and expansion.

The brand has certainly come a long way from the relatively limited product range and enormous waiting lists it used to be known for. And while it now mixes modernity with more traditional production techniques, it still has the appealing humility of a family-run business and remains small enough to respond to changes in the market.

One such change is the advent of new powertrains. Not electric, though the three-wheeled EV3 is still lurking in the background, but turbocharged, this latest Morgan Plus Six marking the company’s first foray into forced induction.

And you already know it’s good as the Plus Six was one of six vehicles included in evo Car of the year 2019. But out of context of those vastly different competitors, what’s it actually like to drive? 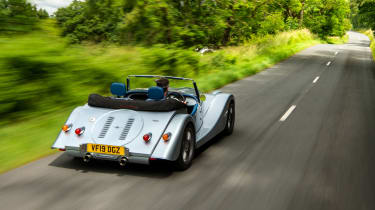 A triumvirate of six-cylinder, rear-wheel-drive sports cars arrived in 2019, all powered by the same BMW-developed B58 turbocharged in-line six. The first of these was, not unexpectedly, BMW’s own open-topped Z4. The second was the long-awaited, fixed-roof Toyota Supra. And the third was rather different: the Morgan Plus Six.

Morgan is no stranger to BMW power plants, its aluminium-structured cars having used BMW V8s for years, but the Plus Six is the first Morgan ever to use a turbocharged engine. In this application the six makes identical power and torque to the engine in the BMW and Toyota, with 335bhp at 6500rpm and 369lb ft from 1600 to 4500rpm, and drives through the same eight-speed automatic transmission, which you can of course control via paddles behind the steering wheel.

Unlike its BMW-powered siblings however, the Plus Six has a dry weight of only 1075kg, or little more than a Mazda MX-5. The fact it’s little quicker to 62mph than its counterparts, at 4.2sec, could be explained by the car’s lack of driver aids, and the 165mph top speed is something you might not want to explore. 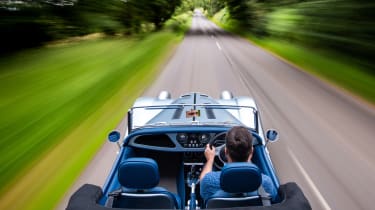 The Plus Six gets a new platform, dubbed CX, claimed to be twice as stiff as the previous-generation chassis and lightweight to boot. It’s formed from bonded aluminium, but it’s slightly bigger too, helping aid practicality. Suspension is by MacPherson struts at the front and a sophisticated (for Morgan) multi-link at the back, with an anti-roll bar at the front alone.

And of course, there’s wood – an ash frame sits atop the chassis, to which the aluminium exterior panel work is attached. This too is thicker, and therefore stiffer, than before. The cabin is mostly traditional, and of course highly customisable at the factory, with a set of analogue instruments and just the tiniest of electronic displays for vital information.

Whoo-eee. This thing’s quite an experience. You’ll want to go roof down, naturally, beautifully crafted though the Plus Six’s hood might be. And while you sit low in a wider context, you sit high relative to the Morgan’s dashboard, doors and its steering wheel, the last feeling curiously low like being in one of those Peugeots with the tiny wheels and raised instruments.

A glance around reveals relatively few BMW-familiar components. The gear selector is straight out of the BMW parts bin, but the steering wheel is more like that in some Lotus models and the gearchange paddles and column stalks appear to be Peugeot items. By and large though it’s all Morgan and all quite wonderful to behold. The view over that long bonnet doesn’t hurt, and the feeling of sitting far back, somewhere over the rear axle, is one that defines the Plus Six experience.

For one, while the engine might be way out ahead of you, you feel very much involved in its effects on the rear wheels. Coming in at well over a third of a ton lighter than anything else using this engine, the Plus Six feels almost terrifyingly quick sometimes. A lack of traction control accentuates the terror – the rears can, and do, spin up easily if your throttle inputs lack subtlety, but being exposed to the elements also contributes. BMW’s B58 isn’t the most characterful six, but here its snorts and rips and pops are all accentuated by the lack of bodywork around you.

It’s also more than enough to give the Morgan’s chassis something to think about in corners. With super-quick turn-in and not much feedback at road-going speeds, it can feel disconcerting as the front wheels feel about half a mile ahead of you. Use too much throttle exiting a corner and the rear can snap around pretty quickly, and then you’ll be wishing for even quicker steering as it can be a little tricky to catch. Throw in a few bumps and the Plus Six can begin to feel a little out of its depth. The brakes, too, need a little more input than you sometimes expect.

Not that it isn’t incredibly entertaining, though. The Plus Six makes you realise how coddled we are by more conceptually modern vehicles. Some of that coddling is undoubtedly worthwhile and has allowed for some remarkable performance cars, but Morgan’s latest offering shows there’s still value in the kind of experience that asks a little more of the driver – more attention, more patience, and more skill. Apply all these qualities and it’s entirely possible to gel with the Plus Six, settling into a fast and entertaining rhythm. 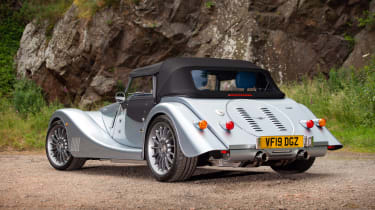 It’s not dissimilar from a Caterham in this regard – a big, slightly less finely honed Caterham – and you reach the end of every journey vibrating slightly just as you do from a Seven, a mix of adrenaline and windswept hair.

If only, like a Seven, it had the option of more supportive seats. The standard items are truly hopeless, neither comfortable over distance nor shapely enough to hold you in place during the car’s wild cornering antics.

Plus Six motoring (doesn’t ‘motoring’ sound like the right word for a Morgan?) begins at £81,995, before you begin delving into the rabbit hole that is all the custom work Morgan’s craftspeople can do on your behalf.

Predictably, this leaves it somewhere out on its own measured by pure bang-per-buck, with the cars sharing its engine nearer the £50k mark and others at £80k offering more speed, security, features and ability. 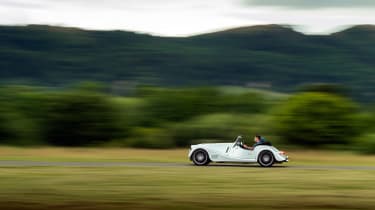 Rather than list all those cars though, one model that does come to mind, having driven it recently, is the Jannarelly Design-1. With a starting price of £85,000 in barchetta form, its own unique take on styling and driving dynamics and a distinctly British flavour (despite Jannarelly being based in the Middle East), makes it quite an interesting alternative. It’s more focused than the Plus Six, and less of a cruiser, but similarly striking and customisable.