The Morgan Plus 8 is never without a dull moment - a truly engaging, engrossing and exhilarating experience 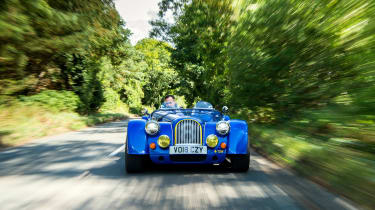 After weeks, no, make that months, of a blazing heatwave that’s turned every single blade of grass in England to bleached yellow, the road to Malvern today is uncomfortably cold, annoyingly blustery and experiencing the kind of relentless precipitation that reduces visibility on a motorway down to 100 yards. I am driving a Lexus LS 500h limousine. Well, I say driving, but it’s very much in the modern, uninterested sense, where the quality of the hi-fi is the most notable aspect – an absurd yin to today’s forthcoming test drive yang.

The Morgan Plus 8 50th Anniversary Edition does have a sound system, but the Alpine head unit looks like it dates from 1991 and I can’t conceive of any possible situation, bar parked, where you’d be able to hear it, for the car it’s in has no windscreen, side windows or roof.

> Click here for more on the Morgan AR Plus 4

As the name denotes, this car marks 50 years since Morgan first squeezed a V8 engine – then the Rover, née Buick, 3.5-litre – under the louvred bonnet of a slightly extended Morgan 4/4. Some 6000 Plus 8s later and the lineage in its current form is reaching the end of the road, the BMW N62 naturally aspirated 4.8-litre V8 that today powers both the Plus 8 and the Aero GT no longer being in production. Just 50 of these anniversary models have been constructed across two versions: the blue ‘speedster’ you see here and a British Racing Green ‘convertible’ with all the weather protection that the speedster lacks. There’s a host of special edition details, including towing eyes, white calipers and a ceramic heat treating on the fat rear exhaust pipes, as well as the graphics, such as the ‘8’ on the grille and the yellow pinstripe around it. An automatic gearbox is available, but thankfully for us, this speedster is a six-speed manual. 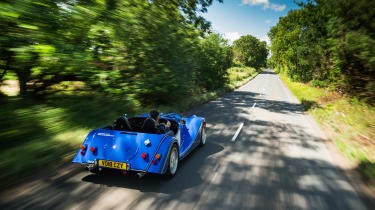 You either fall for the Anniversary the first time you see it or you don’t, and I must confess I absolutely love it. It is parked outside the front door of the factory when I arrive, surrounded by quaint-looking little 4/4s dripping with chrome that inevitably represent for many the cliché of Morgan motoring. By comparison, the impossibly low-slung speedster looks like a cross between a historic racer and a vintage dragster, a whiff of the dieselpunk aesthetic in how it integrates contemporary grunt, semi-slick tyres and LED headlamps.

Plus 8s have evolved considerably over the years since the original with its four-speed Moss ’box, cam-and-peg steering and live rear axle. In 2012 the model received the same sophisticated bonded and riveted aluminium chassis previously the preserve of the new-era Aero models, with further improvements to structural rigidity and the suspension arriving in 2016.

All of which feels very far from the mind as you twist the dainty chrome door handle to gain entry and the thin door clangs shut behind you like that on a fairground ride. The leather-clad seat has deep side bolsters but doesn’t offer great lateral support and sits the driver up high; a lower bucket would be preferable. 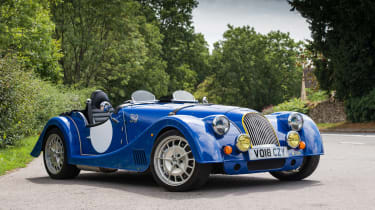 Still, thankfully the rain has stopped, although the air still has a chill and the roads are damp. I leave the tonneau zipped over the passenger side, and hunch forwards to maximise the limited protection from the slipstream that the small aeroscreens offer. A thumb of the starter button wakes the BMW V8, which snorts and huffs quietly through those glorious jutting rear pipes, until, that is, you open the throttle, whereupon the sheer bombasity, volume and wonderfully pure delivery of the engine is enough to make you weep at its imminent demise.

It makes for a fast car, too, which is hardly surprising when you consider that it weighs just 1100kg dry, and has 367bhp and 370lb ft to propel it along. A 0-62mph time of 4.5sec and a top speed of 155mph say much more about the relative sedateness of the manual shift and the rudimentary aerodynamics than the car’s purely accelerative qualities.

You’ll need at the very least a pair of goggles to drive the 50th speedster at speed. Without them it soon becomes tricky to see, as your eyes narrow to slits and then involuntarily close out of self-preservation. A full-face helmet works best of all, as it enables you to breathe more easily too, meaning you can concentrate more on the overall driving experience. Initially, that’s dominated by the engine, with its readily available torque and progressive throttle. The retro-styled but modern alloys are shod with sticky Yokohama Neova rubber, which is, um, considerably less sticky in the wet; there is no traction control (although you do get ABS) and the 50th is the kind of car that will oversteer anywhere and everywhere if you so desire.

The quick, accurate steering and light, precise gearshift further confound the trad appearance, and it’s soon obvious the 50th can be hustled along at a serious pace. Smooth surfaces suit it best: the bumpier the road, the more the car is deflected off line, both at the front and the rear, and major intrusions can occasionally lift you clear of the seat.

But guess what: exposed to the elements at unprintable speed, the V8’s cacophony reverberating off the landscape, the 50th is exhilarating – a truly engaging, engrossing experience. There is never a dull second, and hence it’s entirely understandable why you may feel inclined to spend £129,000 on one. It’s a fabulous sign-off for a very British – albeit German-powered – muscle car.