We've gone for an early drive in the Jannarelly Design-1, does it live up to the sporty design? 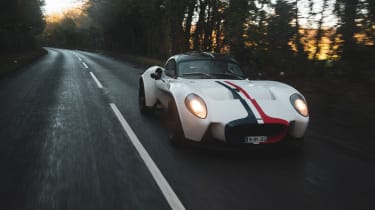 Jannarelly’s Design-1 made its UK debut at last year’s Salon Privé, and the company has now revealed a series of five UK Edition cars to celebrate the marque’s debut, and we've gone for an early drive before customers receive first cars later this year.

Dubai-based Jannarelly came to fruition through founder Anthony Jannarelly’s desire to own a car with the character of a machine from the 1960s, whilst benefiting from the use of modern-day components. The result is the Design-1, a highly customisable model capable of touring, track use and late-night laps around Harrods

To this end the Design-1 is a compact, tubular-frame sports car with carbonfibre, aluminium and glassfibre components, and utilises a mid-mounted, Nissan-derived 3.5-litre V6 sending power to the rear wheels. With 320bhp and 273lb ft of torque, Jannarrelly quotes a 3.9sec 0-62mph time and 135mph top speed – aided by a 810kg kerb weight, a figure that gives the model a peppy 395bhp per tonne power-to-weight ratio 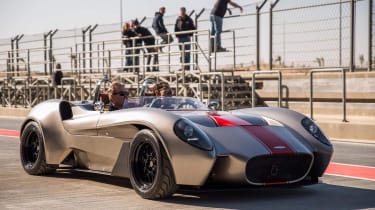 The car also uses unservoed Wilwood brakes, a six-speed manual ’box, limited-slip differential, and sits on 16-inch lightweight Toyo R888-wrapped wheels. Amusingly, however, traction control is optional, while the steering, like the brakes, is unassisted, with little weight over the front wheels.

The Design-1’s standard format is an attractive ‘Le Mans barquette’ configuration, featuring a small perspex aeroscreen, but the new UK Edition cars are all built to coupe specification, with a sleek carbon roof panel supplied, as well as a carbon engine cover. The five cars all feature a different paint colour – red, white, blue, green and grey, with the front grille ringed in white and the car’s characteristic side blades painted (not stickered) with a Union Jack motif.

It’s a mark of the car’s design cues that it carries off the look of a classic British sports car very well indeed, though we suspect if Jannarrelly ever decided to do an Italian Edition it would look equally at home in bright reds, yellows or blues. Buyers of regular Design-1s can of course option pretty much any colour they choose, with the cars built at the brand’s facility in Dubai.

UK Edition models begin at £115,549, owing to their extra specification over and above the base price of £85,000 for the standard Le Mans barquette. 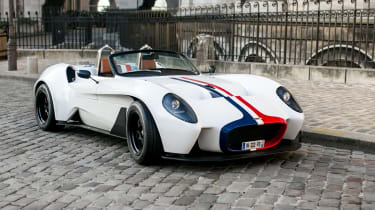 Images can be deceptive. In photographs, the Design-1 looks perhaps the size of a Porsche 911 – not enormous, but large and broad-shouldered enough that its proportions might cause a few white-knuckle moments around town or navigating tighter B-roads.

Such concerns fade away in the metal. In terms of length, the Design-1 is no larger than an MX-5, and while it remains a wide car, it’s an Elise-style wide, where the cockpit is relatively narrow and bodywork extends farther either side. Notably, the car fits comfortably within the lanes of most roads.

The details are a wonderful mix of contemporary and historical, the overall form echoing old Lotuses, Listers and Ferraris, but a ring of modern splitters and diffusers encircles the lower edge of the bodywork as if a modern engineer had time-travelled back to Le Mans in the 1960s.

There’s theatre to entering the car too, particularly with the hard-top. A handle in the centre of the roof panel releases a latch inside that unlocks the top from the twin roll bars, before the whole unit pivots forward either side of the windscreen. Then you open the doors as normal, before placing each foot into the cutout in front of your seat, grabbing the roll hoop, and sliding yourself down into the slim bucket, Caterham style. 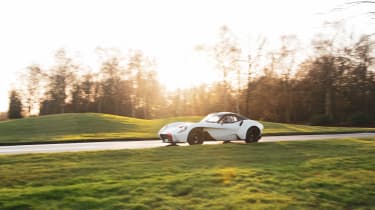 With the roof closed again the environment is cosy. There’s fore and aft movement in the seat, and the tallest drivers will have the option of a fixed pew moulded to the structure to maximise leg and headroom. The steering wheel though is fixed, the dials close behind it, and the postbox-style windscreen barely beyond that, though thanks to deep, Stratos-style cutouts in the doors there’s ample room for shoulders and elbows.

The side glass is part of the hard-top, so small race-style sliding windows allow access to the outside world. With air conditioning part of the specification though – the Design-1 was conceived in Dubai, remember – ventilation shouldn’t be a problem.

The rest of the cabin is stark, but attractive, with custom instruments, leather padding attached to most of the carbonfibre surfaces, an attractive Nardi steering wheel and on our test car, a stunning open-gate manual whose mechanism is on full display, like that of a recent Elise or Exige. The pedals too are a work of mechanical art, race-style floor-hinged metal items. 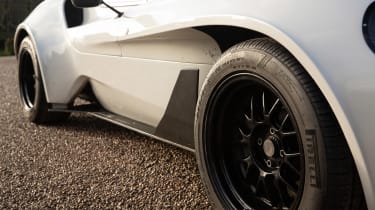 Given the experience of simply installing oneself, it’s little surprise to discover there’s no let-up when you fire things up and get moving. The starter switch is behind a red cover, and while the modern unit and its modern starter motor don’t churn and cough like an older engine, the V6 zings into life with a visceral roar and a shiver through the frame.

The clutch is light, but when cold you need a little effort to slot the chunky gearlever into first. Again, with a modern drivetrain behind the retro controls it actually takes very little effort to get moving, and while initial throttle response is perhaps a touch sharp (being an electronic control, this is something designer Anthony Jannarelly informs me can be tailored to the individual’s taste), pulling out into traffic is no trickier than in any other car.

Unfortunately, local traffic today is proving difficult, so opportunities to really extend the car are limited. But some qualities immediately shine through. Firstly, the Elise-sourced steering rack feels as good here as it does in an Elise, which is a huge deal for any new sports car claiming to offer an authentic experience. Like the Lotus, the weighting feels manageable, the rate of response is predictable, and it bristles with feedback even on straight sections of road – the subtle movement and changes in weight through your palms are instantly familiar to anyone who has driven Hethel’s line-up. 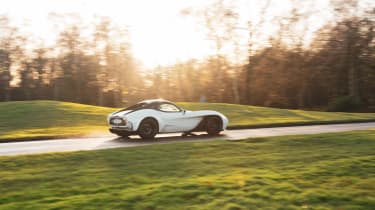 I’m still struggling a little with the edgy throttle, exacerbated by the car’s sheer lack of mass, which sends the car jumping forward with anything but the lightest of brushes of the pedal. With the roads cold and greasy I’m also being circumspect in corners, though there’s almost certainly more traction from the Pirelli P Zeros than I’m prepared to explore today on the narrow, busy roads.

The sharp throttle response does make the car feel quite brisk in any gear too, and when I finally get a chance to tilt the floor-hinged throttle all the way forwards, the result is a riot of induction roar, exhaust howl, and startling forward progress punctuated only by slotting that satisfyingly mechanical gearlever around the gate. Nissan’s engine might not be exotic, but it feels at home here, a potent and reliable alternative to the vintage units it supplants.

The drive is over all too soon, but it’s been a promising experience. Jannarelly himself admits the Design-1 is ‘not a car for everyone’, but it’s hard not to imagine it being appealing to anyone already familiar and fond of alternatives from Lotus, Morgan, Caterham, and other low-volume, highly specialised sports car makers