Morgan has unveiled the most extreme derivative of its Aero 8 model yet. 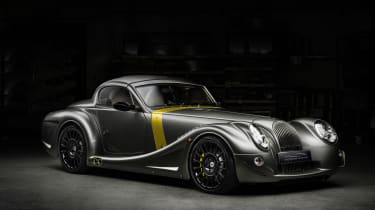 Morgan has revealed the Aero GT at the 2018 Geneva motor show. It’s the brand’s most focused and performance-orientated model to date and only eight examples will be produced, each bearing a price tag of £120,000 plus local taxes.

Power comes from a recent Morgan staple, the BMW-sourced, naturally-aspirated, ‘N62’ 4.8-litre V8 engine, which also features in Morgan’s other Geneva debutant, the Plus 8 50th Anniversary Edition. In the Aero GT it develops 367bhp and 370lb ft of torque, driving the rear wheels through a six-speed manual transmission. Make deft use of the gears and you can launch the car from 0 to 62mph in 4.5sec and eventually hit a 170mph V-max.

To keep things stable at such speeds, Morgan has honed the Aero GT’s aerodynamic properties, which have been informed by the company’s 2009 GT3 race car. A quick glance at the aggressive aesthetic confirms this: dive planes either side of the front apron and louvred front wings aid downforce and reduce lift, while at the rear the sculpted diffuser serves the same purpose.

Beneath the GT3-inspired body you’ll find fully adjustable suspension. Furthermore, Morgan is offering a carbonfibre hard-top, as an option, which features a rear-facing vent at its trailing-edge that helps to create an even slipperier shape. 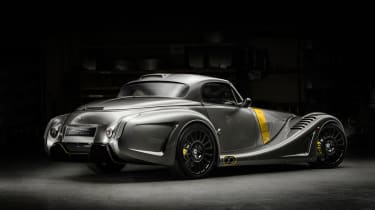 All eight examples will be built by Morgan's Special Projects team to a bespoke specification. Each Aero GT buyer will be privy to design consultancy meetings with Jon Wells, Morgan’s head of design, to establish and configure the car to their exact tastes. The hand-finished cabin can also be customised with a range of wood options and painted accents.

Jon Wells commented: ‘The Aero GT, unlike its predecessors, adopts an unconventionally aggressive aesthetic. However, a purist approach to achieving a design in which form follows function has been rigidly adhered to. This is most apparent in the new additions to the body work.’