The Morgan Plus 8 50th Anniversary Edition unveiled at the Geneva motor show concludes the naturally aspirated era for Morgan. 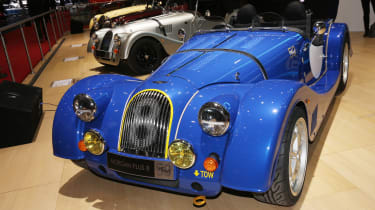 The Morgan Plus 8 50th Anniversary Edition has broken cover at the 2018 Geneva motor show. The British sports car manufacturer hasn’t issued a price for the limited-edition model, which is sharing its debut with a new stablemate, the Morgan Aero GT.

As the name suggests, only 50 examples will be built, and they will constitute the final batch of Plus 8-derived models fitted with the BMW-sourced, 4.8-litre V8. Subsequently, the engine will be decommissioned as Morgan ceases production of naturally aspirated cars.

Morgan hasn’t divulged the full engine specifications just yet – we’re still waiting as the Geneva show goes on – but instead has offered the impressive benchmark performance figures thus far. The N62 V8 will propel the 50th Anniversary Edition from 0 to 62mph in 4.5 seconds and on to a top speed of 155mph. Morgan is also claiming the landmark model is one of the lightest V8 passengers cars in the world at 1100kg, a direct benefit of the lightweight aluminium chassis. 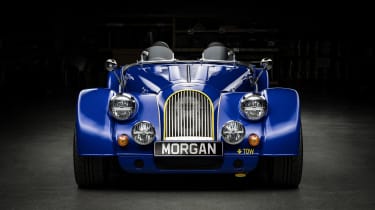 Invoking the color scheme of the first production Plus 8, the special edition’s hand-built body will be finished in a blue lacquer contrasted by yellow accents on the front grill, engine cover and rear towing eyes as shown in the video above. Furthermore, down the side of the vented bonnet you’ll find wording marking out the model as an anniversary edition.

Steve Morris, managing director of Morgan Motor Company, speaking prior to the Geneva motor show said: ‘This 50th Anniversary Edition is a fitting illustration of the Plus 8’s beauty and finesse, coupled with raw exhilaration and capability. Performance has underpinned every one of the Plus 8s that have driven out of our factory gates for 50 years and we’re excited to reveal the car in full in Geneva.’