The Bugatti Veyron based Renaissance hypercar: a love or hate concept rendering 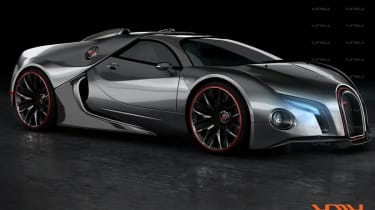 Could you improve on the design of that most modern-day of icons, the Bugatti Veyron? A design student from Canada has given it a go…

These pictures, showing the proposed Bugatti Renaissance, are the brainchild of John Mark Vicente. The project formed part of his coursework prior to graduating in communication design at Emily Carr University of Art and Design in Vancouver, British Columbia.

Initial impressions are mixed. The Veyron was never the most intimidating looking car, but we don’t think that’s such a bad thing when the performance is quite so extreme. The simple fact that Bugatti managed such svelte styling and that luxurious interior combined with a 253mph top speed and a 2.5sec sprint to 62mph is an achievement in itself, so we have to question the motives behind this interpretation. There is a very small list of things the Veyron needs to make it absolutely perfect, and a steroid injection isn’t one of them.

Strangely, that railway tunnel-shaped aperture at the front seems to have grown out of all proportion and now occupies the whole front of the car. The twin vents above the cockpit have also grown into something more at home on a sibling of the Eurofighter. Moving toward the back of the car, the red lines taper in to a pronounced centre section that seems to give the car a more elevated stance on the road. Of course, the humungous wheels don’t do the stance any favours either. Perhaps beefier isn’t always better.

Read the Veyron taking on nine other performance car icons