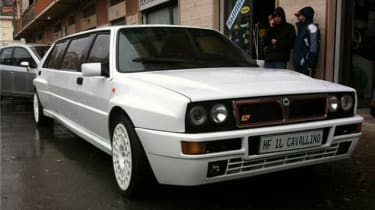 It’s quite often that a modified or tweaked car mildly offends us, but it’s much rarer that we're made genuinely upset by one. Today it’s happened, though, thanks to this Lancia Delta HF Integrale limousine. Make that limousines – a bunch of Italians have seen fit to chop up two examples of one of evo’s favourite drivers’ cars, lob some extra cabin in the middle and produce a brace of Lancia limos. Both are apparently powered by their donor car’s 2-litre turbocharged engines, though it’s unclear (and we’d hedge our bets at unlikely) that their 210bhp outputs are sent to all four wheels. Here’s hoping that it’s all a bit of a hoax, and that some standard (and decaying) Deltas have been sacrificed before being tarted up to appear like hotter HFs. We fear that’s being too optimistic, though…

If you want to really upset us (and have 99,000 euros knocking around) then you can buy the pair of them. Please don't, though.

See a Delta take on Veyron, McLaren F1, F40, 911 GT3 + Zonda Let us know of any other upsetting modified cars you've seen here Follow evo on Twitter or Facebook for the latest car news and views