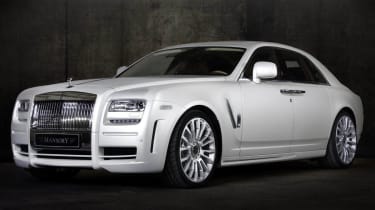 The Rolls-Royce Ghost – a fine car, but it’s hardly subtle. As ever, though, that’s not deterred Swiss tuner Mansory from taking the car under its wing and giving it a whole new lick of paint. Result? The hard-to-miss Mansory White Ghost Limited you’re looking at right now. Styling changes come in the shape of tweaked bumpers, side skirts and aprons, a boot-mounted spoiler and a set of simply enormous 22in alloy wheels, wrapped in performance orientated Dunlop SportMaxx rubber. The obligatory smattering of LED running lights is present and correct, too. Clamber inside and a Kinder Egg inspired interior (dubbed ‘an oasis of luxury’) awaits, with dark brown and light cream contrasting on the leather and Alcantara upholstery. It’s bright. You’ll find more LEDs in here alongside some bamboo trim. A revised ECU sees the Ghosts 6.6-litre twin-turbo V12 engine gain some extra poke – power rises from 563bhp to 629bhp, while torque is upped from 575lb ft to 634lb ft. That’s enough to shift the near 2.5-ton Ghost from 0 to 62mph in an eye-widening 4.5sec and onto a 180mph top speed. Mad stuff indeed. If you’re interested, move quickly – just three are being made, the package costing 119,800 euros (around £100K) on top of the regular Ghost’s £195,840 price tag.

Read about the regular Rolls-Royce Ghost this way

And here's the Mansory version of the Bugatti Veyron...