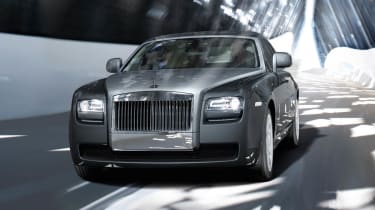 Rolls-Royce has released mechanical details on the Ghost, its new sports saloon being shown at the Frankfurt motor show this week.

While the RR4, dubbed the ‘baby Roller’, is smaller than the Phantom (‘smaller’ being a relative term when it comes to Rolls-Royce – it’s 5.4m long), there’s still room under the brushed-steel bonnet for an all-new 6.6-litre turbocharged V12, putting out 563bhp at 5250rpm and 575lb ft available from just 1500rpm.

This, despite its 2435kg weight, means the Ghost will hit 60mph from rest in just 4.7sec and silently monster its way up to an electronically-limited 155mph.

Rolls-Royce has also confirmed that its new model will run on an air suspension system using multi-link aluminium front and rear axles.  And with an 8-speed automatic ZF gearbox, the Ghost should provide the kind of silky-smooth ride we’re used to seeing in its older brother, the Phantom.

The car is built on a modified BMW 7-series platform, using a steel monocoque instead of the aluminium spaceframe from the Phantom – with the steel frame, Rolls-Royce claims the Ghost has just as much cabin space as the bigger car, as upholstery doesn’t have to make way for the spaceframe’s extruding aluminium.

Rolls-Royce is planning on producing up to 2000 units a year and is expecting 80 per cent of buyers to be newcomers to the brand.  The Ghost will make its way into customers’ hands late this year, but only for those who can afford the £190,000 asking price.

The Ghost will be unveiled at the Frankfurt motor show, opening on September 15.  We'll be reporting live from the show and you can see all the content here.