New Lancia Stratos supercar, based on the Ferrari 430 Scuderia, is officially revealed. Pics and details 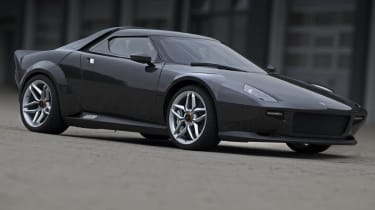 Details of a new Lancia Stratos started to leak out a few weeks ago after one was spotted testing at Fiat’s Balocco test track back in July. This car turned out to be a one-off special, which a wealthy entrepreneur involved in the Automotive supply industry had commissioned Pininfarina to build, requesting them to design a modern recreation of his favourite car of all time, the legendary Lancia Stratos.

This is a dream he (Michael Stoschek) had been pursuing since 2003, first by participating financially in the unsuccessful Fenomenon Stratos project, which presented a concept Stratos for the first time at the 2005 Geneva Motor Show. When this project eventually came to nothing, Stoschek decided to commission Pininfarina to build a one-off vehicle just for himself and his son, Maximilian, to use instead, using a shortened Ferrari 430 Scuderia chassis as the basis for the project.

Doing the dynamic testing on the almost finished car is ex-Formula One driver, Tiago Monterio, and the feedback he gave after the test at the Balocco test track was that the car had fully lived up to the high expectations Stoshek had originally set the team back in 2008.

The car is built entirely from carbonfibre and only weighs 1240kg (around 108 kilos lighter than the donor Ferrari Scuderia), with the weight being equally distributed front and rear. With the 430 Scuderia's 4.3-litre V8 engine pushing out 503bhp, this gives the car a power-to-weight ratio of 413bhp/ton.

For comparison, the original Lancia Stratos produced 190bhp from its 2.4-litre Ferrari V6 engine and had a kerb weight of 980kg, meaning 197bhp/ton, so this new Stratos should prove massively quicker than the original road car ever was.

Stoschek has given Pininfarina the go-ahead to explore the opportunity of building up to 25 examples of this new Stratos, so if you fancy one too, then you’ll need very deep pockets as we hear the expected price will run well into hundreds of thousands of pounds. It’s very pretty though...

Read more about the Fenomenon Stratos