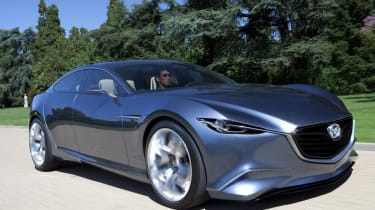 But what’s most notable about it is how finished it is. Concept cars are normally styling bucks, made of clay or wood, a flash surface with nothing underneath. But this one, unveiled at an exclusive private viewing in Milan and not destined to appear at the Paris Motorshow, has a proper interior and even drives -although the engine noise was a curiously indistinct blend of rotary and piston, ‘to keep you guessing’, an engineer told us.

So will it go into production? ‘It’s very, very developed, not so far from production’, one senior executive told us. There's no denying Mazda would like to do it, but they have other prioities first, such as the new 6 family car. That's due to arrive in 2012 and will undoubtedly sport elements of the Shinari's design as Mazda aims to take itself upmarket and reinforce its sporting appeal.

However, given the Shinari's obvious parallels with the RX-8 (production of which ends soon), the coupe would fit the bill. It’s perhaps no coincidence that Mazda’s new head of global design, Ikuo Maeda, was responsible for the RX-8. The Shinari is the first car to express his new Kodo (it translates as soul of motion) design language that aims to blend suppleness with tension.