The all-new Mercedes-Benz coupe saloon is here, as the 2nd-gen CLS is revealed. Details and pictures 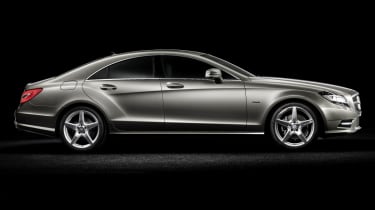 Mercedes-Benz has now revealed tech details of its all-new CLS. At launch the four-door coupe will initially be available with a choice of two V6 powerplants, one petrol and one diesel, with sales due to start next January.

Named the CLS350 CDI BlueEfficiency, the diesel packs 260bhp, while the petrol (CLS350 BlueEfficiency) delivers 301bhp from a 3.5-litre V6, as well as featuring stop-start as standard. From this December buyers will also be able to order a 401bhp petrol V8 (the CLS500 BlueEfficiency), while in March next year a frugal 2.1-litre 4cyl CLS250 CDI will be added, achieving figures of 55.4mpg and 134g/km.

All CLS' will come equipped with the 7G-Tronic automatic gearbox, but the most exciting news comes from the AMG stable where their version of the sleek saloon will be released within the next year, powered by a 5.5-litre twin turbo V8 and offering at least 526bhp.

The CLS enters a far more hostile market than the one it effectively invented in 2003. The CLS carved its own niche but its creation has since inspired the Volkswagen Passat CC, Audi A7 Sportback and BMW 5-series GT, while more practical saloons such as the Jaguar XF have aped its more sweeping, coupe-like window line.  The design retains its predecessor’s proportions yet manages to look strikingly different to before, a sharper, more chiseled appearance reminiscent of the Mercedes SLS AMG supercar and one which is set to influence a lot of future Mercs.

Peruse our picture gallery and let us know your thoughts – is the CLS still a good looker?

Pictures and details of the CLS's toughest foe, the Audi A7