Super-rare Jaguar XJ220S up for auction 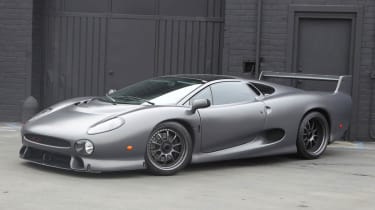 Fancy one of the world’s rarest supercars? Just six Jaguar XJ220Ss exist, and one of them is up for auction in the US next week. If you’re unfamiliar with the XJ220S, think of it as an XJ220 GT3 RS. Built to homologate the XJ220C GT racecar, it’s Jaguar’s supercar with extra power and added lightness. Tom Walkinshaw Racing (or TWR), who played a big part in XJ220 development, helped bring the S to life, stripping its weight by almost 400kg to 1080kg (thanks to all the aluminium bodywork being replaced by carbonfibre) and making it look meaner with a new front splitter, rear wing and more snarling side sills. The twin-turbo 3.5-litre V6 engine also had its output boosted from 542 to 680bhp. Enough to take its power-to-weight ratio way past a Bugatti Veyron’s… This example has had a recent mechanical overhaul to keep it tip-top, as well as a lick of paint on the outside inspired by the one-of-20 Lamborghini Reventon. It also boasts a TWR titanium exhaust system, which was a snip at 20,000 US dollars. If you want to drive an XJ220 like no other, you’ll need to be at RM Auctions’ Biltmore Resort auction in Arizona on January 19 to 20. And with the hammer expected to go down between 225,000 and 300,000 US dollars (£150-200,000), you’ll need a healthy wad of cash with you, too.