The original Reventon sold out despite a stratospheric price tag. Now Lamborghini is repeating the trick with the stunning Reventon Roadster 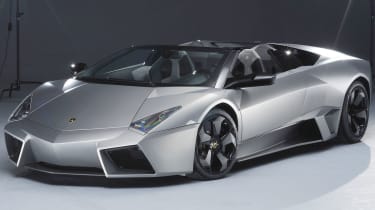 While not quite a night-follows-day proposition that 2007’s Reventón coupe would spawn a Roadster, its appearance at this year’s Frankfurt show was no surprise and strengthens the impression that, looking down from the supercar stratosphere, stormy economic waters are out of sight and out of mind.

The roofless Reventón is described by Lamborghini boss Stephan Winkelmann as ‘the most extreme Lamborghini in the brand’s history’ but, truth is, there’s only so far you can go with a car based on the ageing and soon-to-be-replaced Murciélago, and while it gets the most potent engine in Lamborghini’s arsenal – the 661bhp 6.5-litre V12 from the LP670-4 SV – its core superpowers look a little under the weather compared with the 1000bhp of the Bugatti Veyron Grand Sport and the 529bhp/ton of the considerably lighter Pagani Zonda F Roadster, both circa £1m, both open-top hypercars, both incredibly exclusive.

But nowhere close to being as exclusive as the Reventón Roadster. Only 15 will be built, which makes it not just 15 times rarer than the Bugatti but also 25 per cent scarcer than the original 20-off Reventón coupe, which sold out almost immediately. No wonder Lamborghini didn’t flinch in giving it a price tag nudging £1million (in fact 1.1m euros, plus taxes).

Of course, such close proximity to uniqueness commands its own premium but the fundamental draw of the Reventón is its into-the-red wow factor. Essentially it’s a Murciélago reimagined as an F-22 Raptor fighter jet with lots of cool aerospace/sci-fi touches on the inside. Which you can now see from the outside. Who wouldn’t want one of those?

Especially when you begin to wonder what the SV’s wild V12 – savage enough when savoured from within the confines of the Murciélago’s cabin – might sound like with only a 205mph slimstream to muffle the blood-chilling howl. The Roadster gets the SV engine, and its extra 20bhp, to compensate for the amazingly modest 25kg increase in weight over the Reventón coupe. So there’s no shortfall in performance – 0-60mph is nailed in 3.4sec – just a more exciting soundtrack.

The Roadster is identical in size to the coupe in all but height and constructed in the same way with carbon bodywork (except for the skins of the dihedral doors, which are steel) draped over a tubular steel spaceframe. According to Lamborghini’s engineers the basic structure was already so stiff it needed very little reinforcement when the top was chopped and replaced with a Targa-style panel. Behind the exceptionally low-slung seats are two hidden roll-over bars that automatically shoot up in a few hundredths of a second in the event of an imminent flip. A fixed horizontal wing-shaped crossmember behind the seats incorporates a third brake light and, also distinctive to the Roadster, the long back deck has an almost flat engine cover with more glazing for an even better view of the iconic V12.

The viscous-coupled all-drive chassis is unchanged – no Balboni-style rear-drive heroics for Reventón customers – as is the robotised six-speed e-gear transmission and Y-spoked alloy wheels that shroud the carbon ceramic braking system. And, as with the coupe, a rear spoiler deploys at 80mph to increase downforce, and changes to a steeper angle at 136mph to press the Reventón still more firmly onto the tarmac. In fact, the only other noticeable change is the slightly different shade of grey the Roadster is painted. Perhaps a little unimaginatively, it’s called Reventón Grey. Like the coupe’s, it has a matt finish but is subtly metallic which, in sunlight, ‘displays an unexpected impression of depth’ according to the Roadster’s publicity script.

But, as before, it’s the interior that’s arguably the star of the show with the cutting-edge, strike-fighter themes perhaps even more stunningly resolved than the exterior’s. Instead of dials, the dash has aircraft-style multi-mode liquid crystal displays – two transreflective, one transmissive – set in a housing milled from solid aluminium billet shrouded in a carbonfibre casing. The driver can choose from three vehicle information settings and, at the press of a button, switch from a digital to a quasi-analogical display with classic circular instruments. There’s even a G-force meter that represents dynamic driving forces by the movement of a sphere within a circle, depending on the direction and intensity of the acceleration. A comparable instrument can be found in high performance airplanes.

The cabin is trimmed in Alcantara and leather, which sounds run-of-the-mill for a Lamborghini, but illuminated by the soft blue glow of the TFT displays it looks a whole lot more exotic than any other Lambo’s and, with the possible exception of the Zonda, any other supercar’s, too. Officially, the Reventón Roadster went on sale in October – a few days after the entire production run had sold out. Mad world, mad supercar.