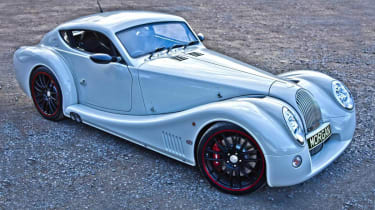 The Morgan Aeromax is back in the form of the new Aero Coupe. It will debut at next month’s 2012 Geneva motor show, seven years after the covers were first pulled off the Aeromax at the same event. Power comes from the same 4.8-litre V8 as the Aeromax and Aero Supersports, but with 390bhp, it’s 28bhp more potent than both. The top speed is 170mph and 0-62mph takes 4.5sec, with an optional automatic gearbox cutting that to 4.2sec. Rather than being a retuned Aeromax, it’s based on Morgan’s GT3 racing car, which should ensure it’s a focused thing to drive. Looks wise, it’s broadly similar to its boldly-designed predecessor, save for the rear where the unique split-hinge windows have gone, leaving a more conventional vertical rear screen, though its styling is still undeniably striking.  As with the previous car, the aesthetics will no doubt divide opinion, but that’s unlikely to hinder sales. After the success of the Aeromax, which was limited to 100 units, the Aero Coupe goes into full production, and you can anticipate it attracting Morgan’s usually long waiting lists. The release date is yet to be announced, but expect to be able to get hold of one in 2013.

Read our review of the Morgan Aeromax