VW Jetta-based Toledo concept to be shown at Geneva, and is 'close to production' 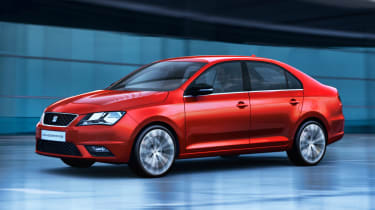 Seat's Toledo concept, to be launched at the Geneva motor show, is very close to the version we'll see in dealers. It shares its platform with the Volkswagen Jetta, but unlke the VW, it's actually a five-door, with a large rear hatch - a first for the Toledo.

The Toledo has been one of Seat's biggest seller's since the first generation car was introduced in 1991, supplying more than 860,000 Toledos to European countries. The latest concept thoroughly re-freshes the range, while retaining what made the original such a success.

It will reach Spanish showrooms before the end of the year, and in tems of pricing, Seat is planning to place it in between the Ibiza and Leon while offering a good level of standard equipment.

All the Geneva motor show news is here